Prof. Chidi Odinkalu, former Chairman of the National Human Rights Commission, has identified electoral violence, hate speech and political innumeracy as some of the major threats capable of undermining the 2019 general elections. 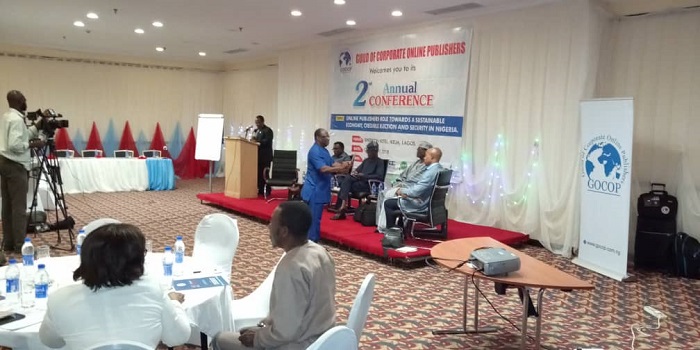 Odinkalu, a Senior Manager, Africa Programme, Open Society Justice Initiative as well as Chair, Advisory Board, Global Rights, said this as Guest Speaker at the Second Annual Conference of the Guild of Corporate Online Publishers (GOCOP) in Lagos.

He spoke on the theme of the Conference: “Fostering a Sustainable Economy, Credible Elections and Security in Nigeria – What Role for the Online Publisher?”

The professor of law, who is also Chair, Board of Directors, International Refugee Rights Initiative, admonished the media to step up its advocacy and enlightenment responsibilities towards ensuring that 2019 elections are conducted in a safe and secure environment void of these threats.

He listed other factors that may undermine the polls to include insecurity, especially with killings and abductions in many parts of the North, South East and South South; food insecurity accentuated by the killings and violence in the nation’s food basket states of Benue, Adamawa, Plateau among others; and the growing abuse of drugs (opiods), which he explained has a direct correlation with violence.

While sympathising with journalists and the journalism profession in the 21st century, which he described as a “dangerous business, a risky venture”, he insisted that despite the obvious threats to the lives of journalists, media practitioners must never shy away from their primary duty of bringing public actors to account to the people.

According to Odinkalu, electoral violence has the capacity of casting huge slur on the electoral process such that the electorate are not only intimidated, the entire process is bullied, and the outcome is mutilated.

He wondered that given the red flags and flashpoints of violence already recorded in the primary elections, the nation’s security apparatchik may have more than enough to chew in its duty of securing the nation.

He said: “With the armed forces now leading in security provisioning and deployed in all states of the country, security institutions are likely to be stretched very thin ahead of the 2019 elections. I do not wish to get into predictions of fields of violence in the 2019 elections, but it would also be naïve, based on what we already know and have seen, to assume that the contest will be without major incidents.”

With elections holding in 36 states and 774 local government areas across 8,809 registration areas (wards) in a total of 119,973 polling units with an expected voting population of 84.2 million registered voters at a time the nation is almost at war with itself, Prof. Odinkalu said both the electorate and the security agencies need to collaborate, especially in intelligence sharing, so as to nip some premeditated violence in the bud.

According to him, the media, especially corporate online journalists, must take the lead in reporting the entire electoral process impartially and objectively as any attempt to engage in partisan reporting will throw up dire consequences that may consume the society, including the media itself.

He said Nigeria suffers a crisis of self-manufactured innumeracy, which makes it difficult to cast ballot, count ballot accurately and announce credible result.

He said: “Elections are about numbers because democracy is about counting. Every democracy is built on counting the people (demographics of census), counting the voters (elections) and counting and distributing the commonwealth (appropriations). In this way, numbers are supposed to make us honest. In Nigeria, however, we choose to subvert all these processes of counting through manufactured political innumeracy.

“Predictably, Nigeria has a habit of historically innumerate counting, especially in elections. Our elections are often problematic not because we don’t vote peacefully (we mostly do) but because we choose almost always to be rooked with counting. Like the auto assembly, our political innumeracy is born of a completely knocked down (CKD) process. It begins long before the vote. It has already begun with the party primary process with some State Governors manufacturing ghost numbers of turnout that were manifestly fictional.”