August 26, 2017 Comments Off on Nigeria gets high rating on road safety 801 Views

As the Federal Road Safety Corps held its 7th annual lectures series on Thursday, August 24, 2017 members of the international community have rated Nigeria among countries with robust road safety strategic agenda, with calls on other nations to emulate it. 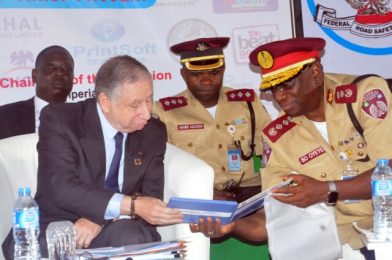 This was the main focus of this year’s annual lecture delivered by the United Nations Secretary General’s Envoy on Road Safety, Jean Todt, who was the Guest Speaker at the FRSC 7th annual lecture series held at the Banquet hall of the Presidential Villa, Abuja.

According to the Corps Public Education Officer, Bisi Kazeem, in the lecture, titled: “Achieving the Goals of the UN Decade of Action For Road Safety in Africa,” Todt stated that in his past meetings with Presidents of other African countries, one of the issues that had continued to top his discussions with them was the need for them to promote issues of road safety in their countries.

This, he said, was because of the debilitating effects of road traffic crashes on the social and economic wellbeing of the people of the African continent.

He however expressed happiness that Nigeria is not only operating a road safety lead agency, but has been at the forefront of campaigns for safer road environment within the West African sub-region and African continent at large.

The UN Envoy described the situation of road traffic crashes in Africa as very disturbing and called on governments of the region to devote more resources in tackling the menace.

He stressed that if Nigeria could sustain its commitment to road safety through increased investment in the campaign, the country stands the chance of attaining the target set by the United Nations in its Decade of Action of Action For Road Safety: 2011-2020.

Todt said: “Nigeria is doing well in road safety agenda in Africa, and it should sustain its investment for the effects to become manifest.”

Speaking on the importance of road transportation in Nigeria, the UN Envoy declared that for a nation whose citizens depend largely on road for their transportation needs, the only way to contain the menace of road traffic crashes was for the government to ensure that it invests adequately in road safety, adding that the nation must do more to move road safety agenda forward through various means including legislation and public awareness creation.

He also called on the Nigerian government to do more in streamlining its data collation system to make it align with that of the World Bank for a harmonious data from the country.

“Nigeria could serve as an example for other nations through credible data management; but this cannot be achieved without some level of investments in data processing and cost,” he stated.

Furthermore, Todt disclosed that as part of the commitment of the United Nations to tackling the issues of financing road safety programmes, a special road safety fund is being conceived by the UN General Assembly.

He called on the Nigerian government to support the initiative to make it a success and create a situation where accessibility to safe and affordable road infrastructure could reach majority of the people by 2030.

In addition, he called on the people to support road safety activities as a national agenda, noting that road safety is an all inclusive programme.

In his address, the Special Guest of Honour and Vice President, Prof. Yemi Osinbajo, who was represented at the occasion by the Minister of State for Works, Power and Housing, Alhaji Suleiman Hassan, congratulated the leadership of the FRSC for the success it has achieved through the FRSC annual lecture series, which serves as an avenue for creating public awareness on issues of road safety in the country.

According to Osinbajo, the vision behind the establishment of the FRSC as Nigeria’s lead agency for road safety management and administration 29 years ago, has been vindicated, adding that the menace of road traffic crashes remains a source of concern not only to the country but most developing economies of the world and attracting the attention of the UN General Assembly.

The Vice President disclosed that at the First Global Conference on Road Safety held in Moscow, Russia in 2009, member states of the UN agreed on the need to dedicate the next decade to road safety with focus on campaigns against the menace of road traffic crashes and massive participation of governments, non-governmental organisations, communities, religious and traditional institutions as well as the media on how to contain the menace.

“The declaration of 2011-2020 as Decade of Action for Road Safety by the United Nations General Assembly in 2010, was therefore, the most audacious demonstration of the commitment of the world body to tackling the challenges which road traffic crashes pose to mankind,” he stated.

Osinbajo maintained that Nigeria as an active member of the United Nations has been unrelenting in its commitment to fighting the scourge of road traffic crashes in the country and the West African sub-region through evolvement of various measures.

He further noted that aside having a road safety lead agency saddled with the responsibility of ensuring safer road environments in the country with full legislative powers and autonomy of enforcement, Nigeria was the first nation in the Africa Continent to activate the UN Decade of action campaign in 2010 under the auspices of the Federal Road Safety Corps to set the roadmap for attainment of the goals.

“The FRSC Annual Lecture Series, inaugurated some years back, forms part of the nation’s activities aimed at creating public awareness on issues of road safety among various stakeholders,” he added.

The Vice President commended the United Nations for giving prominence to issues of road safety in the country and across the world as demonstrated by the choice of Todt, assuring that Nigeria remains committed to sustained investment in road safety.

“Let me state that part of Nigeria’s commitment to the success of the UN Road Safety campaign is the nation’s continuous and expanding scope of legislative review of the law setting up the FRSC to enhance its capacity to enforce and boost the competence of its personnel through their capacity development as well as massive logistics support by the Federal Government,” he stated.

He further assured that as a leading nation in Africa with Afro-centric foreign policy objectives, Nigeria will continue to render necessary support to the FRSC to make it possible for it to extend technical assistance to the neighbouring countries in Africa for them to establish their road safety lead agency in saving them from threats of road carnage.

“I must however stress that keeping the road safe is not a responsibility which one government agency can successfully handle alone, except with the support of all citizens and stakeholders who must join hands in the spirit of shared responsibility,” Osinbajo said.

In his welcome presentation, the Corps Marshal of the FRSC, Dr. Boboye Oyeyemi, expressed worry at the rate at which road traffic crashes affect the social and economic wellbeing of the people of the country.

The Corps Marshal disclosed that in the determination of the FRSC to tackle the menace of road traffic crashes in the country, FRSC took the strategic decision to key into the Accra declaration of 2007-2015 and the African Road Safety Charter, 2011-2020, all of which aligned with the national development agenda of Vision 20:2020.

The goals of these declarations, he said, were to assist in combating the road safety challenges of the country and the African continent at large.

These include development of safe system approach, activities and multi-sectoral involvement and an all inclusive approach.

Oyeyemi pointed at the adoption of the Nigeria Road Safety Strategy Document 2014-2018, which aimed at achieving 35 per cent fatality reduction as one of the strategic outcomes of government interventions in matters of road safety in the country.

He commended the Federal Government for sustaining its support for the FRSC, saying the investment in road safety by the government has yielded positive result as evidenced by the reduction of the rate of death, which was 16,382 in 1982, but down to about 5,053 in 2016.

The FRSC boss expressed satisfaction with the outcome of the FRSC’s adoption of Safe System Approach, saying it led to reduction of Nigeria’s fatality rate to about 6,000 death per annum.

The Corps Marshal further stated that FRSC will continue to make efforts that could result in improvement in its crash data capturing mechanism and analysis while the nation strives to meet the target of crash without death.

“Sustaining the safe system approach will set Nigeria among the top of the 20 safest nations in the world by 2020,” he stressed.

Other speakers at the event, which attracted huge foreign and local participants, included the Acting Secretary to the Government of the Federation, Dr. Habibat Lawal; the Minister of the Federal Capital Territory, Mallam Mohammed Bello; and the Chairman of the occasion and Ooni of Ife, Oba Adeyeye Enitan Ogunwusi.

The pioneer Chairman of the FRSC Board, Prof. Wole Soyinka, added his voice to the call for people to take personal ownership of issues of road safety.

Among those that graced the seventh edition of the FRSC Annual Lecture Series were the UN Representative in Nigeria; the former Secretary to the Government of the Federation, Alhaji Yayale Ahmed; some past Chairmen of the FRSC Board; top government officials; road safety practitioners from home and abroad; representatives of military and paramilitary organisations in the country. members of Diplomatic Corps; Civil Society Organisations; transport unions; and stakeholders from the public and private sectors.

It would be recalled that the idea of the FRSC Annual Lecture Series was conceived some years back as part of the strategic initiatives for creating public awareness on issues of road safety.

Accordingly, eminent scholars, road safety experts and transport administrators as well as top government officials have always been selected to present lectures on various topics that could engender people’s consciousness on issues of road safety.