Three blueprints relating to Disaster Risk Reduction (DRR) have been authenticated, courtesy of a gathering of diverse government and private sector stakeholders, who rose from a two-day validation workshop that held from Thursday, April 20 to Friday, April 21 2017 in Keffi, Nasarawa State, at the instance of the National Emergency Management Agency (NEMA) and the United Nations Development Programme (UNDP). 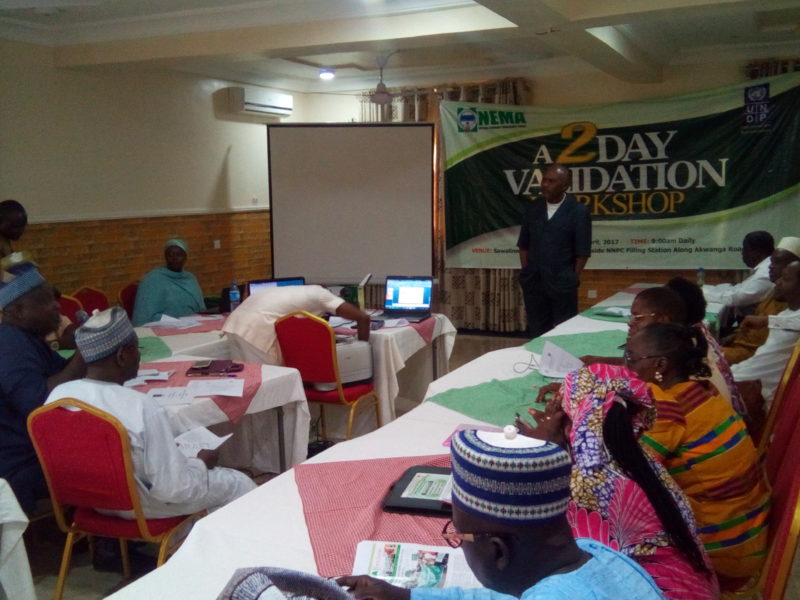 A view of participants at the Validation Workshop

At the workshop, relevant stakeholders present made inputs and observations in the bid to validate the three documents that had been completed and submitted by consultants.

As part of the Eighth Country Programme of the Federal Government of Nigeria / UNDP Plan of Action, NEMA developed these policy documents in collaboration with the UN agency.

The draft National Plan of Action for the implementation of the Sendai Framework for Disaster Risk Reduction (2015-2030) emerged following a meeting held in February 2017 in Abuja.

Among the resolutions of the meeting was the need to set up a technical committee to produce a working structure for the National Platform. Another resolution was the need to develop a National Programme of Action for the implementation of the Sendai Framework for Disaster Risk Reduction (2015-2030).

Speaking at the event, Director General of NEMA, Mustapha Yinusa Maihaja, expressed optimism that, at the end of the day, Nigeria would have in place “validated policy document, implementable action plan and workable structure for the National Platform that meet requirements of the Sendai Framework on Disaster Risk Management”.

According to him, Nigeria instituted the National Platform for DRR in 2010 as an off-shoot of the global platform for DRR, which was first held in 2007. The fifth session will hold next month in Mexico.

“At a similar meeting of African countries, the Sixth Session of Africa Regional Platform on DRR was hosted by Mauritius on November 22-25, 2016,” said Maihaja, who is an engineer.

United Nations Resident Coordinator and Humanitarian Coordinator in Nigeria, Edward Kallon, reaffirmed the belief of the UNDP in the crucial role of a fully functional National Platform on Disaster Risk Reduction in Nigeria.

“This meeting as well as others held previously will reposition and revitalise the platform towards the development of a Programme of Action for the Sendai Framework, strengthen the National Emergency Management Agency (NEMA) and SEMAs, while laying a good foundation for better multi-stakeholder response and management of disasters in the country,” he said.

Kallon, who is also the Resident Representative of the UNDP Nigeria, commended the resuscitation of the platform by NEMA, which he said is coming on the heels of the Africa regional meeting in Malabo. He described the development as a clear indication of “Nigeria’s strong commitment to the regional outcomes and the leading role it is playing in Africa.”

His words: “It is expected that the platform will leverage the momentum from the regional platform to articulate a national plan of action, national implementation plan for the Sendai Framework as inputs into the upcoming meeting in Mexico.”

The Sendai Framework is an international document which was adopted by UN member states between 14th and 18th of March 2015 at the World Conference on Disaster Risk Reduction held in Sendai, Japan and endorsed by the UN General Assembly in June 2015. It is the successor agreement to the Hyogo Framework for Action (2005–2015), which had been the most encompassing international accord to date on disaster risk reduction.

It is a 15-year voluntary, non-binding agreement which recognises that the State has the primary role to reduce disaster risk but that responsibility should be shared with other stakeholders including local government, the private sector and other stakeholders 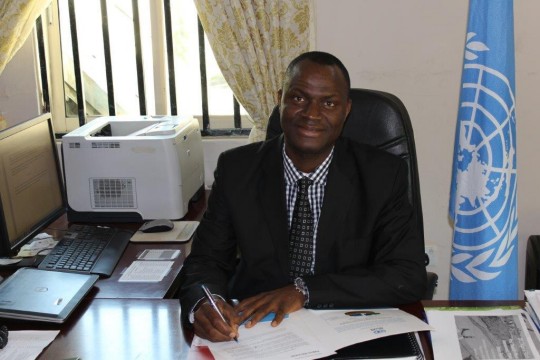