The Nigerian Erosion and Watershed Management Project (NEWMAP) has begun the process of controlling gully erosion threatening the Federal High Court and other property at the Alex Ekwueme erosion site, Awka, the Anambra State capital. 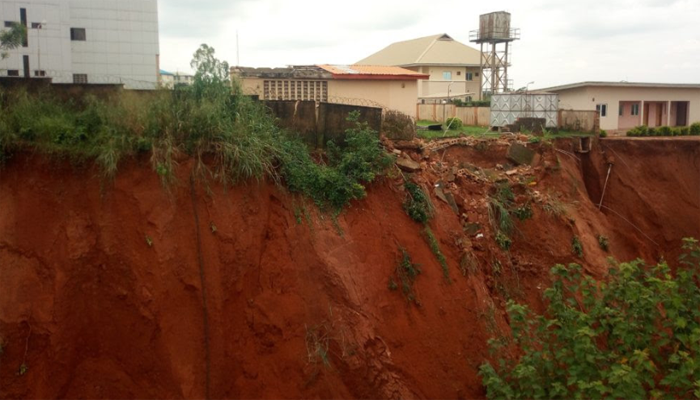 Mr Mike Ivenso, Project Coordinator of NEWMAP in Anambra, told the News Agency of Nigeria (NAN) on Sunday, Deptember 23, 2018 in Awka that the project had held a pre-bid meeting with some potential contractors for the control works.

He said Gov. Willie Obiano had declared emergency on the Alex Ekwueme gully erosion site which was threatening several structures, including the Federal High Court, a hotel, federal secretariat and access roads.

He said the bidding process was “abridged” in the light of the urgency of the project and the need to rescue the area expeditiously.

The World Bank-sponsored NEWMAP project coordinator said the prospective contractors were expected to respond on or before Oct. 4, two weeks after the process commenced instead of the normal eight weeks.

Ivenso said the contract would be for a period of 12 months but expressed hope that it would be delivered by March next year.

According to him, funding for the project has been appropriated by the state government which is working in concert with the Federal Government as well as the World Bank.

“We have met with potential bidders, six of them, and they have visited the site to take an assessment of what to do to enable them come up with responsive bids which we can evaluate.

“His Excellency, Gov. Willie Obiano has declared an Emergency on the Alex Ekwueme erosion site and has mandated NEWMAP and all relevant agencies to fast track the intervention works here.

“A lot of landslide has occurred here, and the erosion is fast encroaching into the Federal High Court and the governor has directed that we expedite control intervention works here.

“This vicinity houses significant amount of federal, state and private property, the area is called Central Business District, the Federal High Court is not the only threatened structure.

“We have a five-star hotel, the State High Court is not far from here, there is the upcoming Federal Secretariat, access roads to the other parts of the district are all in severe danger and that is what informed the declaration of emergency in this area.

“We intend to rescue all these properties with a combination of civil works and bio-remediation activities,” he said.

Ivenso said the Anambra government had already spent about N22 million on the preliminaries of the project as a demonstration of its commitment to the speedy execution of the project.

“Already, Anambra Government has spent about N22 million on Environmental Impact Assessment and Resettlement Action Plan; these are the two major things that must be done before any World Bank intervention works can commence as well as the engineering design.

“The Administration Judge of this court has expressed grave fears about the emerging erosion, the Judges complex have been vacated because of the advancing landslide, our mandate is for a speedy and rapid response, so, we expect that it will be remedied by March next year.

Contributing, Mr Mike Okonkwo, Commissioner for Environment in Anambra, said that Obiano was very concerned about the erosion challenge, the safety of Anambra people and their property.

Okonkwo said the governor was glad that the intervention process has started with the commencement of bidding and thanked the World Bank and Federal Government for heeding the call to rescue the area.

“We have had ministers and heads of agencies visit the area, everybody knows that it is a very dangerous environmental challenge, that is why the bidding process is abridged.

“We must pay attention to every detail in the bid so that we don’t get any objection, we look forward to seeing the end of this by Oct. 4,” he said.

Like Loading...
2018-09-23
admin
Previous: Minister seeks time from court to account for spending on water
Next: UNEP, UNIDO, others urge adoption of technology to address climate change