A research published on Monday, February 5, 2018 in the journal Proceedings of the National Academy of Sciences has highlighted the urgent need for governments to develop measures to control the spread of emerging alien species. 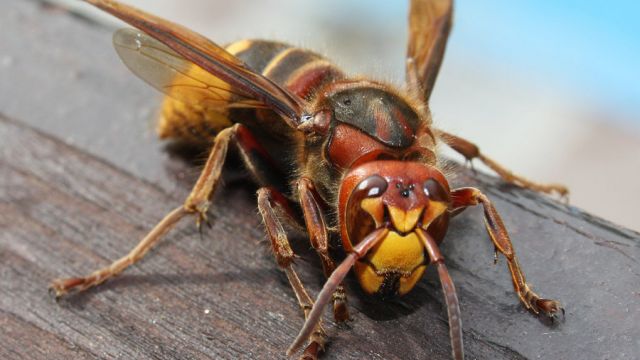 The Asian hornet preys on other species of insect

Up to 16% of all animal and plant species have the potential to become invasive alien species (IAS), according to the new report. “These results suggest that there remains a high proportion of emerging alien species we have yet to encounter, with future impacts that are difficult to predict,” says Dr Hanno Seebens of the Senckenberg Biodiversity and Climate Research Centre and Lead author of the report, in respect of which the International Union for the Conservation of Nature (IUCN) SSC Invasive Species Specialist Group (ISSG) made contributions.

For the study, researchers investigated the emergence of alien species worldwide over time by analysing a number of datasets including the IUCN Global Invasive Species Database (GISD) and the IUCN co-developed Global Register of Introduced and Invasive Species (GRIIS). These datasets provided approximately 46,000 first recorded sightings of established alien species, spanning the past five centuries – the period during which humans increasingly developed passages for species to travel across the globe.

“Between 2000 and 2005, one in four alien species introductions had never been recorded as alien before. These emerging alien species pose a significant challenge to biosecurity measures as it is difficult to predict how they will arrive, and where from,” comments Dr Seebens. “Current biosecurity approaches often rely on knowledge of already known invasive alien species, but this study highlights that early detection and eradication measures will be more important than ever before.”

Over the past two centuries, humans have been responsible for the introduction of thousands of plant, animal and fungi species to regions outside of their native range. Traditionally, species have been introduced to new areas through the transport of commodities, however the study found that new trade networks and environmental change are contributing to the increasing number of introductions of alien species.

Some of these introduced species have become invasive, and have had significant impacts on human health, economies and ecosystems. The Asian hornet (Vespa velutina), introduced to western Europe in 2004, preys on other species of insect, particularly honey bees. This has led to major losses in honey bee colonies, decreasing beekeeping production and therefore impacting local economies. The species is also a threat to public health and incidences of anaphylactic shock due to people being stung have been reported. The full impact of the species invasion as as yet unknown.

“Ignoring emerging alien species may lead to direct socio-economic and environmental consequences. The IUCN SSC Invasive Species Specialist Group are working with scientists and policy makers across the globe in an attempt to increase the knowledge base on alien species, and build capacity in order to prevent their introductions and manage their impacts.” Piero Genovesi, co-author of the paper and Chair of IUCN Invasive Species Specialist Group.

The findings of this study support the Honolulu Challenge, a global initiative born at the IUCN World Conservation Congress, which calls for urgent and bold action on invasive alien species in order to protect biodiversity and human well-being from their current and future impacts.