Some consumers of bushmeat in Bayelsa State on Sunday, October 9, 2017 said that they were not worried by the outbreak of Monkey Pox, a viral disease transmitted from wild animals to humans. 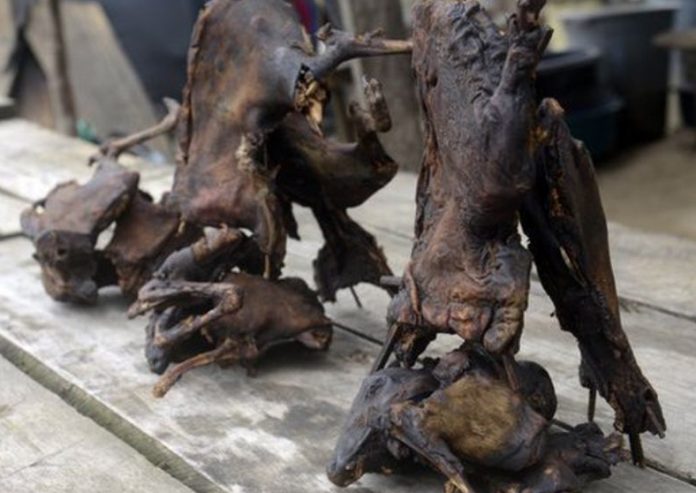 Bushmeat on display for sale

The disease was reported a forthnight ago and was said to have affected no fewer than 13 people in the state, according to Prof Ebitimitula Etebu, Bayelsa Commisioner of Health.

Etebu, who assured that the situation was under control, urged residents to be vigilant and wash hands after contact with wild animals, who are the primary vectors for the Monkey Pox virus.

The citizens were also warned against eating bush meat, a delicacy to many people in the state, as it is suspected to be one of the sources of contracting the disease.

Howevr, some of the residents, who spoke on the advice from medical experts to curb the spread of the virus, urged the government to lay emphasis on hygiene and not to blacklist bushmeat.

Investigations in Yenagoa and Ogbia areas in Bayelsa on Sunday indicate that business is still thriving at bushmeat joints and restaurants that serve the delicacy.

Some of the restaurants in Yenagoa and Otuoke, that serve bushmeat, which were visited were found to still be enjoying patronage despite warning from health practioners.

Mr Endurance Frank said he was still eating bush meat, and dismissed the views that eating the delicacy posses risk of contacting Monkey Pox, adding that he did not believe that the disease was caused through eating bush meat.

“This is how they said Ebola is caused by bush meat. We wash ours here and cook it very well, the government officials who are handling the campaign against the disease should not use their job to kill the business of others.

“It is common knowledge that when bushmeat is cooked well no virus can survive it, so their message should rather be on advising people to ensure they cook bushmeat properly and the same is true for all types of meat.

“So why do they still come even as at Friday night, they were here and we enjoyed bushmeat together,” Frank said.

He urged the Federal Government to support those that have been isolated and ensure that the public is encouraged to maintain high hygiene standards as a preventive measure.

Another resident, who patronises bushmeat joints, Mr Felix Okpu, said even the outbreak of the disease would not deter him from eating bushmeat, adding that he was going to have his bushmeat delicacy at his favourite restaurant in Yenagoa.

ALSO READ:  How Nigeria can breakthrough in fight against tuberculosis – WHO

“I must commend Bayelsa government for taking steps to curb the disease, but it is not enough to say that bushmeat is the cause rather they should educate people on how to handle meat generally and not single out bushmeat which is our favourite here in Bayelsa,” he said.

Mrs Ogidobor Digha, who operates a bushmeat bar in Otuoke, said her business was still thriving and yet to be affected by the outbreak of the Monkey Pox disease.

“I believe the disease is not caused by the bushmeat in our bush here. Bushmeat cannot be transmitting such disease in our environment here, and also we take extracare in preparing and handling the meat and also we allow it to cook properly,” she said.