Minister of Environment, Amina Mohammed, has urged civil society and the people to work closely with government to fight the menace of insurgency and other militant acts in the country. 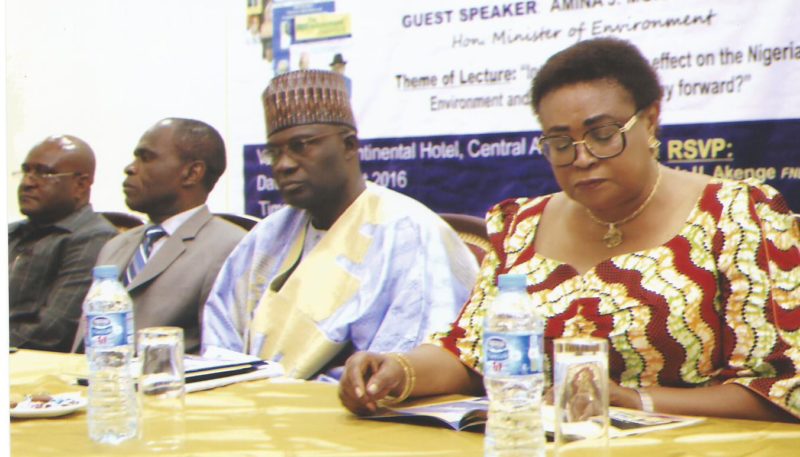 The minister, who spoke recently in Abuja at the 7th Environment Outreach Magazine Public Lecture, reiterated the fact that government alone cannot win the war against insurgency in any form without the active collaboration of the people.

She stressed the need for closer cooperation in view of the enormous damage the scourge has cost the country in material terms and general damage to the environment.

According to her, Nigeria’s economy has suffered greatly in the last two decades since the activities of militants escalated in the Niger Delta. “Pipeline vandals have wreaked havoc on our environment due to the huge amounts of crude oil spilled into the environment by their nefarious activities. This has in turn reduced our oil production output with attendant consequences for the economy,” she disclosed.

The minister, who was represented by the Director-General of the National Environmental Standards and Regulations Enforcement Agency (NESREA), Dr. Lawrence Anukam, lamented the activities of the Boko Haram insurgents that have in the last few years caused serious dislocations and untold hardship to the people of the north-east and other parts of the country. She called for an immediate end to the activities of insurgents in all parts of the country so that developments can thrive.

Chairman of the occasion and former Minister of Environment, Sir John Odey, commended the publication for its commitment in ensuring an enduring and well protected environment for the country by creating awareness of environmental issues across the country.  He called on the authorities and other corporate bodies to support and partner with the magazine in sustaining the fight against environmental abuse and degradation in the country.

He described the topic of the lecture, “Insurgency and its effect on Nigeria’s economy and environment”, as very apt and urged all stakeholders to close ranks and ensure that the environment is protected from abuse in all forms.

Special Guest of Honour, Dr. Daru Owei, former Deputy Managing Director of AGIP, stressed that the environment has become a strong issue now both locally and globally, not only to the oil industry but to all strata of society.

Publisher and host of the event, Chief Noble Akenge, stated that the reason for initiating the Public Lecture Series was to create awareness and also bring environmental issues to the front burner of national discourse and action.

He described the theme of the Lecture as very appropriate in the light of the heavy damage insurgents, militants and pipeline vandals are doing to the Nigerian environment and economy.

He said: “From the Boko Haram insurgency in the north which has devastated our environment and virtually halted most of the desertification projects in the frontline states to the activities of militants and vandals that have made life virtually unbearable for the people of the Niger Delta and Nigerians in general, the story is the same.”

He lauded President Muhammadu Buhari for his positive response to the recommendations of the UNEP Report on Ogoniland and the launching of the clean-up process and urged the President to speed up the process through appropriate institutional mechanisms and action and also extend it to other states in the Niger Delta where oil exploration and exploitation has caused considerable damage to the ecosystem over the years.

He appealed to the Federal Government to strengthen the Federal Ministry of Environment and Regulatory Agencies like NESREA and NOSDRA through capacity building and adequate funding of their operations to enable them carry out their statutory functions effectively.

He called on corporate bodies and other institutions in the country to begin to respect and place value on the nation’s collective heritage – the environment.

“A percentage of the huge profits being declared annually by many of these corporations and financial institutions can be ploughed into environmental protection and sustainable development activities in our country,” Akenge stated.

As part of activities marking the event, Environmental Awards were conferred on eminent Nigerians who have distinguished themselves in the protection of the environment through positive action and years of dedicated service.

Some of the recipients include the Minister of Environment, Amina J. Mohammed; Governor Ben Ayade of Cross River State; Professor Sani Abubakar Mashi, Deputy Vice Chancellor (Admin) of the University of Abuja; Kingsley Chinda, former Commissioner for Environment, Rivers State and presently Chairman of Public Accounts Committee of the House of Representatives, Abuja; and, Professor I. K. E Ekweozor, Secretary, Board of Trustees, Nigerian Environmental Society.