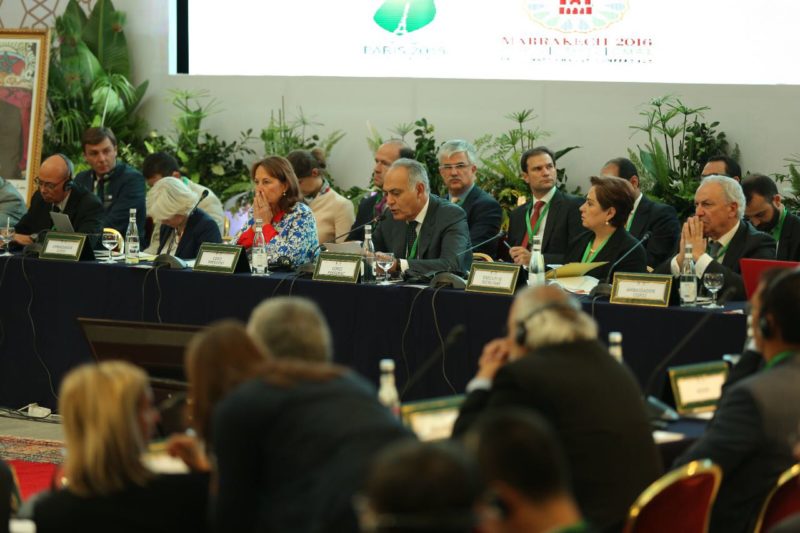 Delegates at the ministerial meeting

Chaired by Salahdeddine Mezouar, Minister of Foreign Affairs and Cooperation of Morocco and COP22 President; Segolene Royal, Minister of Environment of France and COP21 President; and Patricia Espinosa, UNFCCC Executive Secretary, the Pre-COP assembled delegations from more than 70 countries to achieve a common understanding of the state of negotiations ahead of COP22. The main areas of discussion covered the early entry into force of the Paris Agreement scheduled for November 4 and the holding of the first meeting of the Parties to the Agreement (CMA1) on November 15 during COP22.  The joint high-level segment of the COP, CMP and CMA would be convened immediately after the CMA1 opening, where all Parties will make their national statements.

The presence of His Majesty King Mohammed VI of Morocco, the UN Secretary-General and Heads of State and Government on that occasion will amplify the historic significance of the moment.

In addition, participants addressed the implementation of the Paris Agreement, the development of its rulebook, finance for climate adaptation and mitigation in developing countries including a $100-billion-dollar-per-year roadmap proposal made by donor countries for climate finance by 2020, the issue of Loss and Damage as per the Warsaw Mechanism, capacity-building initiatives such as the Paris Committee on Capacity Building, the Capacity Building Initiative for Transparency and the NDC Partnership to strengthen and help countries implement their Nationally Determined Contributions(NFCs) to the global response to climate change. COP22 will include the Marrakech Call to Action, to be made during the high-level segment featuring Heads of State and Government on November 15.

The plenary sessions were rounded out by a discussion on the Global Climate Action Agenda led by the Moroccan and French High-Level Climate Champions, Hakima El Haite and Laurence Tubiana.

A series of thematic days (agriculture & food security, cities, energy, forests, business, oceans, transport, water, gender) focusing on accelerating and mobilising climate action by non-state Party actors including businesses, cities, sub-national governments and NGOs, will be held during COP22 with Gender Day on November 15, the Women’s Leader Summit, November 16 and the High-Level event on November 17 featuring the presentation of the Global Climate Action Agenda report.  The Moroccan Presidency intends to take stock during the conference with civil society and chart a common climate agenda.

Participants at the Pre-COP Ministerial meeting will return to the Ochre City in less than three weeks for COP22, November 7 to 18.