Malaysian authorities on Monday, August 20, 2018 announced the discovery of 50 pieces of rhino horn at a postal aviation centre in the Kuala Lumpur International Airport in what is believed to be Southeast Asia’s largest single seizure of rhino horns. 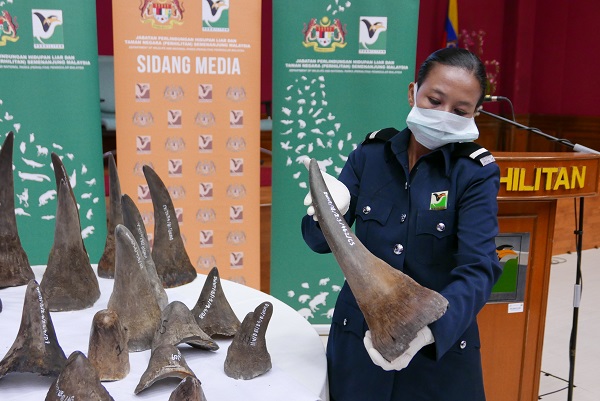 An airport official with one of the seized items

The horns were packed in boxes that also contained nine whole carnivore carcasses, and all were bound for Ha Noi, Viet Nam.

This incident follows several high-profile rhino horn seizures in Southeast Asia in 2017 and earlier this year. It includes a case of 46 rhino horns seized at Viet Nam’s Ha Noi’s Noi Bai International Airport in March 2017 that were smuggled in two suitcases on a flight from Kenya. A month later, Malaysian Customs seized 18 horns smuggled on a flight from Mozambique to Doha.

In February this year, Singapore jailed a Vietnamese for 15 months for attempting to smuggle eight pieces of cut horn and a bag of shavings. The man was flying from Dubai to Lao PDR via Singapore’s Changi Airport. Just last month, a Vietnamese man was stopped at Tan Son Nhat airport for illegally transporting 12 rhino horns from Angola.

The rhino horn seizure announced on Monday took place a week earlier on Monday, August 13 when officials of the export branch of Pos Aviation suspected something amiss with a consignment at the cargo terminal building in the airport’s Free Commercial Zone. They alerted the Royal Malaysian Customs who in turn called on the Department of Wildlife and National Parks Peninsular Malaysia (Perhilitan).

The agent who managed the consignment is under investigation, said Perhilitan Director-General, Dato’ Abdul Kadir Abu Hashim, who added that initial investigations showed false information had been used in the shipping document.

Neither the source of the horns and the carcasses, nor the length of time they have been in storage, is known.

Perhilitan reported collecting DNA samples of all the seized items for analysis to identify all the species involved in the seizure. Kadir also said Perhilitan will work with Interpol on the case, which is being investigated under Malaysia’s International Trade in Endangered Species Act 2008 as an illegal export offence.

The case, according to the authorities, once again highlights illegal trade links between Malaysia and Viet Nam. At least 15 Vietnamese nationals have been held for wildlife related offences in Malaysia since 2016, having been caught with hundreds of wildlife parts and snares.

“This was a very unusual mix of wildlife parts found – rhino horns which were clearly not from Asia and carnivore carcasses which could have originated from the country,” said TRAFFIC’s Acting Southeast Asia Director, Kanitha Krishnasamy.

According to her, th discovery raises questions about how criminals are accumulating wildlife parts and using a multitude of routes and methods to traffic them onwards to destination countries.

“The situation calls for a closer look into KLIA and all its operators including agents, transportation and logistics companies,” said Krishnasamy.

In a separate case, Perhilitan has charged a local man for illegally keeping three juvenile orangutans. The man, who had offered the animals for sale online, was apprehended in July. He has been released on an MYR80,000 ($20,000) bail and has been ordered to surrender his passport while awaiting trial.

DNA tests have shown all three animals to be Sumatran Orangutans Pongo abelii and steps have already been taken to arrange for repatriation of the animals to Indonesia, said Kadir.

In a similar case in 2015, Perhilitan rescued two juvenile orangutans from the online pet trade. Both the animals were eventually returned to Sumatra.