The Lagos State Government on Tuesday, February 20, 2018 said that the ongoing construction of the Ilubirin Housing Scheme would be completed before the end of the year while it would go on sale to members of the public from the first quarter of 2019. 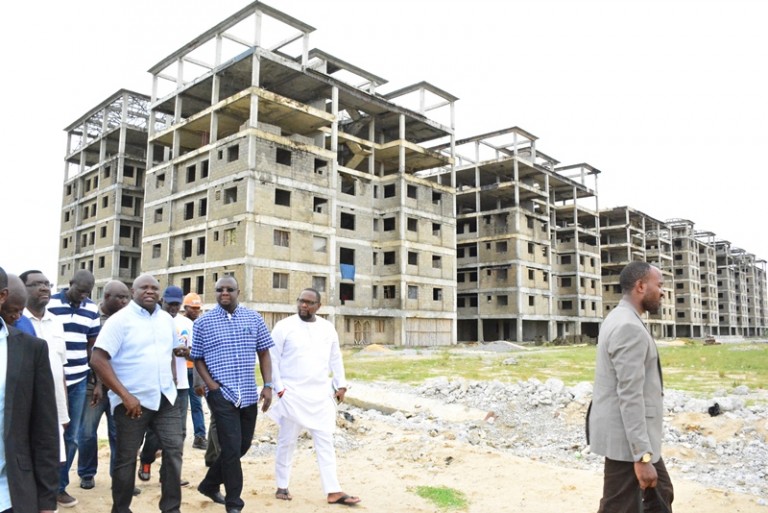 Lagos State Governor, Mr. Akinwunmi Ambode (in white shirt), during an inspection of the Ilubirin Housing Scheme on the Lagos Island

The government, in a statement signed by the Commissioner for Housing, Mr. Gbolahan Lawal, said the development of the scheme would be built in seven phases starting with the completion of the existing structure which is already underway, while other plashes of the project would be completed over a period of three years terminating in 2022.

The Ilubirin Housing Scheme, initiated under the Lagos Home Ownership and Mortgage Scheme (LAGOSHOMS) in 2014 and conceived as a purely residential scheme, was redesigned to accommodate a live, work and play area in the scheme.

Lawal said the government, due to the massive housing projects ongoing across the state and the limited budgetary provision to complete them, sought a partnership with private sector players through a joint venture agreement to complete the project.

“After a review of the proposals received from various companies for the completion of the project, Messrs First Investment Property Company (FIDC) was selected to partner with the state government to fulfill the vision of Ilubirin.

“The company is expected to source fund for the completion of the project and also to provide technical expertise for its completion. The equity of the state is majorly the land and the development executed to date,” the commissioner said.

He said the new design of the project will comprise 472 units of studio apartments; one-, two- and three-bedroom flats; terraces; and penthouses, while commercial unit and recreational facilities such as sporting facilities, parks, a club house as well as child day care facilities would also be accommodated.

“The water front will be developed as an active promenade with restaurants and bars. A shopping mall will be located by the eco-park and will be a destination for visitors and sight seers. There would be something for everyone in Ilubirin,” Lawal said.

The commissioner also disclosed that careful infrastructural and environmental planning was considered, explaining that due to the location of the scheme on a reclaimed land, flood simulations had to be undertaken, integrity tests carried out while traffic studies were commissioned due to its proximity to the busiest network of roads between the Mainland and Island.

“One challenge unique to the site however is its proximity to a series of drainage channels carrying effluent from Lagos Island. To address this, an eco-park has been designed to counter the impact of sewage and contribute to a cleaner Lagos.

“The high visibility of the site along the Third Mainland Bridge axis demands exemplary aesthetics. Like the Lekki Link Bridge, this project has the potential of becoming an iconic reference point and a catalyst for the regeneration of the surrounding areas such as Isale-Eko, Dolphin and Osborne Foreshore,” he said.

He said the FIDC has already assembled a team of local and international experts to come up with a master plan that would showcase the site’s position as a residential, commercial and leisure environment along the lagoon resulting in a 24-hour cosmopolitan lifecycle.

Besides, Lawal said a power generation project supplying electricity to the grid would be hosted on the site to drive a 24-hour live, work and play environment, while the project will enhance the Light Up Lagos Initiative of the State Government.

“A new flyover will be built to connect the development to the Third Mainland bridge axis. This will ensure seamless integration into the wider road network without impacting negatively on the existing traffic,” he said.