In its submission to the UNFCCC a few weeks before the Paris climate summit, India also promises to generate 40% of its electricity from renewable sources 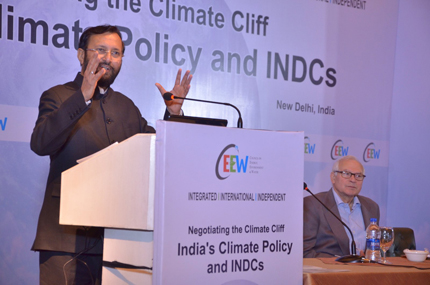 India’s much-awaited Intended Nationally Determined Contribution (INDC) to the global combat against climate change promises the country will reduce the intensity of its greenhouse gas (GHG) emissions per unit of GDP by 33-35% by 2030, compared to 2005.

India – the world’s third highest GHG emitter but way down the list on per capita emissions – has promised to generate 40% of its electricity from “non-fossil fuel based energy resources by 2030 with the help of transfer of technology and low cost international finance including from Green Climate Fund (GCF)”.

The 40% includes hydropower and nuclear power. India already has a target of generating 175 GW through solar and wind power by 2022. The government now plans to float infrastructure bonds to the tune of US$794 million, particularly for renewable energy projects. India’s electricity demand of 776 terawatt hours in 2012 is estimated to increase to 2,499 TWH by 2030.

Submitting its INDC almost literally at the last hour of the United Nations Framework Convention on Climate Change (UNFCCC) deadline, the Indian government also promised “to create an additional carbon sink of 2.5 to 3 billion tonnes of CO2 (carbon dioxide) equivalent through additional forest and tree cover by 2030”.

The approximate cost of India’s climate action in mitigating GHG emissions and adapting to climate change effects is estimated at US$ 2.5 trillion.

Addressing the media nearly 11 hours after the government had submitted the INDC, Prakash Javadekar, India’s Minister for Environment, Forests and Climate Change, said a 35% reduction in emissions intensity by 2030 was a “75% jump in ambition over 2020 targets. We have increased the target of non-fossil fuel based energy capacity to 40%, which is a jump of 50%. This is a huge jump.”

By carrying out the activities promised in its INDC, “India will save carbon emissions to the tune of 3.95 million tons,” Javadekar added.

By and large, independent analysts were supportive of the INDC, but they had some questions. Talking about the emissions intensity reduction target, Siddharth Pathak of Climate Action Network pointed out, “It is not clear whether these are carbon emissions or GHG emissions. In China’s INDC they clearly state that it is carbon dioxide emissions per unit of GDP.” Carbon dioxide is the most significant GHG, but there are others, including methane, water vapour and some refrigerant gases.

Sandeep Chachra, Executive Director of ActionAid India, said, “Despite huge developmental challenges, India has put forward a climate action plan that is far superior to ones proposed by the US and EU. Its ambitious focus on energy efficiency and dramatic increase in renewable energy deserves credit but must lead to enhanced energy access for the poor. This clearly puts the onus on developed countries to meet their obligations of providing public finance and technology transfer to developing and least developed countries.”

Sanjay Vashist, Director, Climate Action Network (CANSA), said, “India, through its announced INDC, demonstrates its willingness to play an important role on the international stage ahead of the climate talks in December in Paris.  India’s signal could no doubt be much stronger – going even further to help the international community avoid unmanageable climate impacts – should the rich and developed countries step up and provide adequate finance and technology support.”

Harjeet Singh, Climate Policy Manager at ActionAid International, said “The devastating extreme weather events in the last few years have pushed India to recognise its vulnerability and prioritise adaptation to the impacts of climate change. In its climate action plan, India shared how its expenditure on programmes with critical adaptation components has increased from 1.45% of GDP in 2000-01 to 2.82% during 2009-10. It is now focusing on several climate sensitive sectors such as agriculture, water management, health and protecting biodiversity.”

Javadekar also asked developed countries to “at least walk the talk on $100 billion GCF considering that funds required to combat climate change run in trillions.” In 2009, rich nations had promised that by 2020 they would ramp up their climate financing to $100 billion per year, but the GCF has just a little over $10 billion in its kitty now.

Governments from many rich countries have said there was no way they could mobilise so much money. Reacting to that, Javadekar referred to a Columbia University study which said this money could be raised by levying a cess of $4 per tonne of coal. “That is a one-stop solution. We are doing it but they haven’t done it.” India levies a coal cess of Rs 200 (over $3) per tonne.

As for India’s main promise, some international analysts referred to a number of recent studies that recommended an emissions intensity reduction target of 35-50%. They said the declared target of 33-35% was definitely achievable and India may well surpass it.

India’s 2008 National Action Plan on Climate Change (NAPCC) had eight missions to deal with climate change and its effects. Its INDC now confirms what the Narendra Modi has been saying for some time – four missions or programmes will be added. These are for wind energy, health, waste to energy, and coastal areas. The INDC says the government is also redesigning the National Water Mission and the National Mission on Sustainable Agriculture. However, it does not contain any detail on any of the new missions.

The INDCs – to be submitted by all countries – will form the bedrock of a global agreement to fight climate change. The agreement is expected to be signed at the Paris summit this December. By the morning of October 2, 120 of the 194 member countries of the UNFCCC had submitted their INDCs, and the number was changing almost by the hour. An independent analysis showed that INDCs submitted by October 1 – and this included most major emitters – may be able to limit average global temperature rise to 2.7 degrees Celsius by 2100, above the two-degree limit agreed by all governments in 2010.

India’s INDC raises a prickly issue still unresolved on the road to Paris – the extent to which rich nations will help others to reduce their emissions and to handle climate change effects. It says the government wants “to mobilize domestic and new and additional funds from developed countries to implement the above mitigation and adaptation actions in view of the resource required and the resource gap”.

Throwing its weight behind a strong deal in Paris, the government has said, “The successful implementation of INDC is contingent upon an ambitious global agreement including additional means of implementation to be provided by developed country parties, technology transfer and capacity building.”

These “means of implementation” are going to be very costly. “Preliminary estimates indicate that India would need around US$206 billion (at 2014-15 prices) between 2015 and 2030 for implementing adaptation actions in agriculture, forestry, fisheries infrastructure, water resources and ecosystems,” the INDC reads.

“Apart from this there will be additional investments needed for strengthening resilience and disaster management. An Asian Development Bank study on assessing the costs of climate change adaptation in South Asia indicates that approximate adaptation cost for India in energy sector alone would roughly be about US$ 7.7 billion in 2030s. The report also projects the economic damage and losses in India from climate change to be around 1.8% of its GDP annually by 2050.”

“Mitigation requirements are even more enormous. Estimates by NITI Aayog (National Institution for Transforming India) indicate that the mitigation activities for moderate low carbon development would cost around US$ 834 billion till 2030 at 2011 prices.” NITI Aayog is the successor to India’s Planning Commission.

The government has not yet finalised how much climate money India will need from rich nations. According to the INDC, “A preliminary estimate suggests that at least $2.5 trillion (at 2014-15 prices) will be required for meeting India’s climate change actions between now and 2030.”

As for the other big issue dividing developed and developing countries, India has reiterated its demand for transfer of clean technologies “free of Intellectual Property Rights (IPR) costs to developing countries. IPR costs can also be borne from the GCF through a separate window.”

India’s INDC lists the steps it will enhance and its new initiatives:

These are apart from the new missions under the NAPCC.

Officials had earlier hinted that India may submit two INDC figures – one based on what it could do on its own, and the other what it could do if it received all the help it wanted from developed countries. The INDC that has been submitted does not follow that pattern, but makes it very clear that India wants substantial help from rich nations. 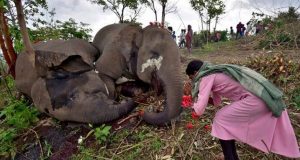