Activist groups in Africa and beyond have called on the Japanese firm implicated in the oil spill off the coast of Mauritius to urgently contain, clean-up and remediate the devastated ecosystem.

The groups, comprising Friends of the Earth Africa, the African Climate Justice Group, and Friends of the Earth Japan, in a statement made available to EnviroNews on Monday, August 24, 2020 also called for the solidarity of African and international entities to collaborate for the full restoration of the affected environments, including saving the coral reef on which the ship ran aground to the state it was before the spill to enable the people of Mauritius to go back to their usual livelihood practices.

MV Wakashio, owned by Mitsui O.S.K. Lines, Ltd. (of the Mitsui group), carrying 4,000 metric tons of oil, ran aground just off the coast of the small island nation of Mauritius on Saturday, July 25, 2020 and broke apart on Saturday, August 15, 2020. Over 1,000 metric tons of the oil in the ship reportedly spilled into the surrounding waters, even as there are concerns that more oil will spill from the ship. This spill has caused substantial damage to the Island’s ecosystem and local livelihoods.

While standing in solidarity with the people and nature of Mauritius, as well as condemning the spill, the activists demanded full compensation to individuals and businesses that have lost income because of the incident.

They further submitted: “We call for clean renewable, community owned and controlled energy to drive low carbon and low pollution development across Africa and an Africa wide framework to achieve this goal

“We also call for the international conventions and laws that govern our seas to be tightened, and compensation for Mauritius, for the negative environmental and socio-economic impacts that are still unfolding.

“We call on local communities, activists and governments to work to ensure that transnational corporations do not continue to define and drive the development process on the continent, including by supporting binding legislation to regulate these entities at national, regional and international level, in order to put an end to corporate impunity.”

Mauritius is a biodiversity hotspot and the spill occurred near two environmentally protected marine ecosystems and the Blue bay marine reserve park which is a wetland of considerable international significance. Coral reefs, protected lagoons and the nation’s shorelines have already been impacted, the groups disclosed.

According to them, the slow governmental response to clean-up the over 1,000 tonnes of oil is adding to the severity of the impact on coral reefs, mangroves, fish spawning sites, tourism as well as fishing livelihoods, some of them considered damaged beyond repair.

“The growing drive for natural resource exploitation, and track-record of poor management in the extractive and tourism sectors will intensify the range and frequency of such disasters, and conversely reduce the resilience of human populations to withstand them. The true cost of this will inevitably be borne by all communities within the region.

“Incidents like this clearly demonstrate why it is important to have strong laws and regulations in place to protect our ecosystems and local livelihoods. The pressure on African governments to relax the already ineffective environmental and social safeguards that exist in their energy, mining, transport, and agricultural sectors is enormous.

“We note that Africa is on the frontlines of the climate crisis, bludgeoned daily by the impacts of the crisis with minimal resources to confront and reduce the impacts. The intensification of the climate crises clearly indicates that we can no longer continue with a global economic and social system that is addicted to fossil energy and other extractive industries. This will invariably lead us to the destruction and desecration of our rivers, lands, air, our common heritage, our home – Planet Earth,” the groups stated. 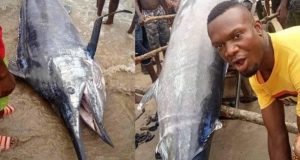