May 12, 2020 Comments Off on Group faults Lagos’ report on water supply amid pandemic 501 Views

The Corporate Accountability and Public Participation Africa (CAPPA) has faulted reports by the Lagos State Government that most communities in the state have been enjoying improved water supply since the COVID-19 pandemic began, describing the claim as fictitious.

The Lagos Water Corporation (LWC) had, in a press statement on May 7, 2020 listed Dolphin Estate, Magodo, Ikoyi, Saka Tinubu, Victoria Island, among a host of other communities in Lagos that have been enjoying its service delivery since the pandemic began. The LWC Managing Director, Mumuni Badmus, also added that the identified communities commended its services.

CAPPA has however countered the corporation’s position, calling it fictitious and insisting that its own investigation carried out in Adiyan, Iju, Epe, Isashi, Shasha, Surulere-Itire and other communities where the largest population of Lagosians reside show that the LWC facilities were near grounded and water was not available for residents.

ALSO READ:  Why Water Resources Ministry should be given rightful premium

CAPPA Programme Manager, Aderonke Ige, said: “We find it quite ludicrous that the LWC is conducting its own poll and appropriating improved services to itself to such an extent that it denies the reality that the larger segment of Lagos population does not have water to wash or even keep proper hygiene. It is very shocking.”

Ige explained that CAPPA’s investigation showed that, between March 20 and April 18 during the lockdown in the state, none of the waterworks were functioning up to installed capacity, adding that the causes of the shutdown ranged from unavailability of diesel in the plants, to power outages, and technical hitches, among others.

In the breakdown of the investigation’s results, Adiyan which has an installed capacity of 70 million gallons per day (MGD) only produced as much as 23.33 MGD (its highest within this period) on April 14 and this volume declined to 14.56 MGD as at April 16.

Isashi with installed capacity of 4 MGD only produced as much as 2.2 MGD on April 9. This declined to 0.95MGD as of April 16.

Also, Ikosi waterworks with 4 MGD installed capacity did not produce any water throughout the period in review. Other waterworks visited are Epe, Agege, and Surulere-Itire.

Ige noted that the missing link thus far is the failure of state governments to build the required political will to prioritise water for citizens through comprehensive public investment in infrastructure necessary to provide universal water access, jobs, improved public health, and invigoration of the Lagos economy.

She insisted that the parlous state of the waterworks reinforces the call by the Our Water Our Right Movement, which CAPPA is  a member, for a comprehensive investigation of the funds ploughed into the rehabilitation of the 48 waterworks in Lagos including the N1.6 billion by the last administration in the state.

She asserted that it is now time that the Lagos government  acknowledge the dire situation in the water sector, pull back from the misdirection that planned privatisation of the sector has created, and adoption of real solutions within the realm of the public sector.

“At a time that the state government should prioritise provision of water as a check to the spread of the COVID-19 pandemic, the last thing Lagosians need is the self-praise that the LWC is involved in. This diversion is unacceptable,” she insisted.

Previous: AATF, AUDA-NEPAD to commercialise agricultural research in Africa
Next: What sustainability means for actors from local, international levels 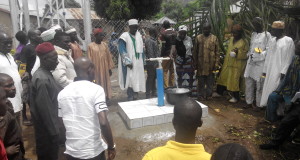 Privatisation not solution to lack of access to water, says forum