As the month of November approaches, the international community is making feverish preparations towards the forthcoming 23rd Session of the Conference of the Parties (COP23) to the United Nations Framework Convention on Climate Change (UNFCCC) in Bonn, Germany. 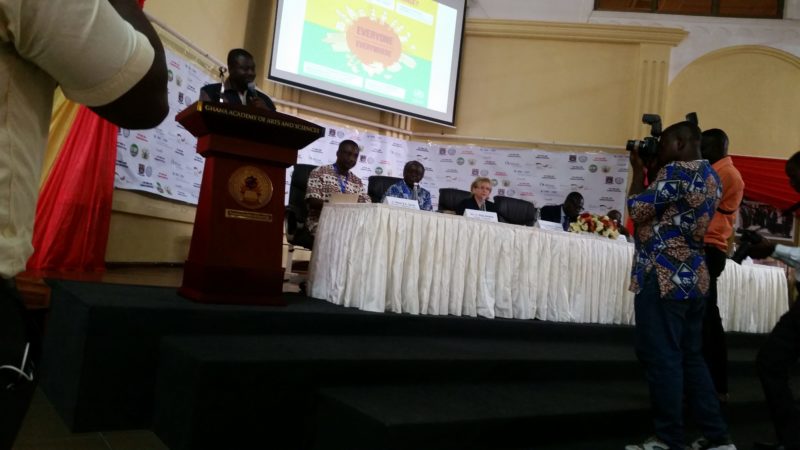 Dignitaries at the 2017 Pre-COP Climate Festival in Ghana

Ghana, like most African countries, will participate in the conference, scheduled to hold from November 6 to 17, 2017. And as part of the preparatory activities, a forum was recently held in Accra, dubbed: “2017 Pre-COP Climate Festival.” It was the sixth in the series of annual dialogue platforms instituted in 2012 by the Regional Institute for Population Studies (RIPS) of the University of Ghana, Legon, under the Africa Adaptation Research Centres of Excellence Project implemented with support from the International Development Research Centre (IDRC) of Canada.

The purpose of the annual event is to bring technical issues related to climate change adaptation and mitigation closer home to policy makers, managers, students, activists, religious leaders, metropolitan municipal and district authorities and officials, and the diplomatic community. It creates the space for diverse stakeholders of scientists, experts, academia and non-scientists to interact with each other and deliberate on issues of climate change that affect society and undermine development, and is of critical concern to the international community; hence, its timing to precede the COPs to the UNFCCC.

The theme for this year’s event was: “The Risks We Do Not Want.” The aim was to sensitise the Ghanaian public about COP23 and Ghana’s performance in relation to climate change.

The Convener of the Festival, Dr. Delali Dovie, explained that this year’s theme was evolved from the Cities and Climate Project being implemented by RIPS, and which see cities as holding the key to development and therefore must be resilient to deliver its development agenda.

However, the current images of cities are that of damages and loss from extreme floods events and storms that have ravaged the country in recent times. Additionally, cities have become major sources of atmospheric pollution, even though there are resources to control carbon emissions and reduce the impacts of global warming.

Dr. Dovie stressed that the “the battle against climate change will largely be won in the cities…”

In his keynote address, the Director-General of NADMO, Eric Nana Agyemang-Prempeh, noted the appropriateness of the theme for the Festival, saying “it could not have been better as the warming of the globe approaches a ‘tipping point’ that could be catastrophic for lives on earth.”

He alluded to the increasing number of severe weather and extreme climate related events with devastating consequences in many countries, and observed that African countries, including Ghana, are extremely vulnerable to climate change with increased risk of drought, famine and floods.

Mr. Agyemang-Prempeh congratulated member countries of the UNFCCC who set the ambitious targets of the Nationally Determined Contributions (NDCs) of the Paris Climate Agreement in order to keep global average temperatures below two degree Celsius.

For 20 years, global negotiations have been on-going to come up with an effective, fair, sustainable solution that is acceptable to all nations. Finally, on December 12, 2015 at COP 21, in Paris, France, members agreed to combat climate change and undertake actions and make investments towards a low carbon, resilient and sustainable future. Known as the Paris Agreement, it brought together all nations, for the first time into a common cause based on their historic, current and future responsibilities.

The NADMO Director-General highlighted the difficulty in implementing the Agreement to the letter, “unless the consequential needs of technology development and transfer, capacity building, costs and financing were addressed.”

He proposed a number of things that Ghana could do to ensure delivery of her NDCs. “The state must be committed in supporting policies that solve key climate compactible development and climatic risk reduction challenges, intellectual leadership and innovation; we must support the application of the best science and technology disciplines to respond to the multi-dimensional issue of climate change towards our nationally appropriate mitigation action (NAMA); and we must ensure that climatic risks to society especially the poor, farmers, women, the elderly and least capacitated are drastically reduced.”

Obviously, these proposals require partnerships that support innovations. Mr. Agyemang-Prempeh cited the partnership between NADMO and the German Cooperation on Integrated Climate Risk Management Transfer as an innovation on drought risk insurance towards resilient agriculture and food security, central to the country’s NDCs.

He said the next 13 years provide the window of time “in which our economies must shift towards low-carbon development and resilience,” and hinted that the NDCs will now become a priority for NADMO. This means that NADMO will have to adopt a new posture to work towards strengthening climatic risk mitigation, preparedness, response and recovery.

The Deputy Head of Missions at the German Embassy in Ghana, Hans-Helge Sander, said the Embassy was aware of the impacts of climate change especially as it manifests in the agricultural sector. Therefore, the Embassy was providing technical support to Ghana through a number of activities such as its partnership with NADMO and the African Risk Capacity Project. He described COP 23 as the conference that will outline the next steps towards implementing the Paris Agreement.

The Canadian High Commissioner to Ghana, Heather Cameron, announced several initiatives of her country to address climate change. These include Canada’s commitment of an amount of $2.65 billion to support developing countries adaptation programmes in response to climate change over a five year period.

She called for adaptation programmes that will give more attention to developing the potential of women to actively participate in solving problems.

Ms. Cameron congratulated RIPS for assembling such diverse stakeholders and bringing on board the youth represented by students from the Presbyterian Boys Senior High, Kimbu Senior High and St. Mary’s Senior High schools to participate in the discussions.

For his part, the Director of RIPS, Prof. Samuel Codjoe, traced the history of the RIPS from its establishment in 1972 as a UN sponsored regional demographic training centre for Africa, and said it has now become a full-fledged institute of the University offering Masters and doctorate programmes. He said RIPS has also established the Ghana Climate Change Resource Centre with support from IDRC.

As part of the Festival there were panel presentations and discussions on priority issues for African Negotiators at the COP, Ghana’s performance in relation to climate change and the African Risk Capacity Programme under which, the concept of the Sovereign Drought Insurance in Ghana scheme was introduced to participants.

Discussants for the first panel presentations were Mrs. Patience Demptey, a Gender Consultant and Dr. Ama Essel, Health Consultant who are both members of African Group of Negotiators (AGN). They agreed AGN’s contribution to the negotiation has resulted in the 50/50 allocation of resources under the Green Climate Fund (GCF). They said the group was able to secure equal access to the fund by making a case in Paris 2015 for Africa to get more funding for adaptation, because the continent contributed least to global warming and yet was suffering the most from it impacts.

Discussants for the second panel presentations were Mrs. Chalotte Norman of NADMO]s Climate Change Department, Ms. Felicity Le Quesney of the Oxford Policy Institute, UK, Ms. Assia Sidiba of the African Risk Capacity and Foster Gyamfi of Ministry of Finance. They provided insight into the nature of climate and drought associated risks, and the insurance opportunity that the African Risk Capacity scheme provides to tackling increased vulnerability of communities to disasters.

The third group of panelists was Daniel Benefor of Ghana’s Environmental Protection Agency, Kingsley Amoako of the Ministry of Food and Agriculture and Winfred Nelson of the National Development Planning Commission. They briefed participants on the progress Ghana has made with her NDCs, the relevance of the NDCs for long term national development and highlights of the implementation of adaptation and mitigation priorities in the agricultural sector.