The Climate Action Network (CAN) has welcomed the G20 summit’s commitment to strengthen climate action. This, according to CAN, is the first time a G20 Summit has produced a detailed Climate and Energy Action Plan outlining a progressive to-do list to jointly tackle climate change. All countries, save one, recognise that this is about protecting people’s health, safeguarding ecosystems, promoting economic prosperity and global stability. 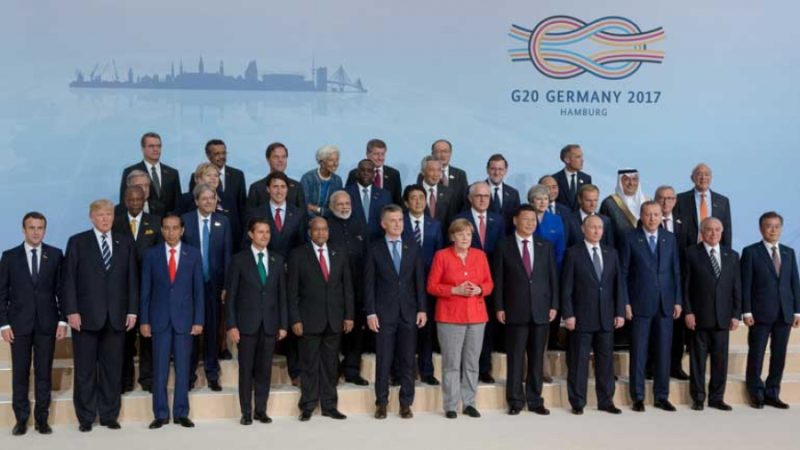 Unfazed by the US withdrawal from the Paris Agreement, the G19 stand united, supported by allies in numerous cities, regions and businesses, to forge ahead with a safe and clean future for all. Civil society wants all countries to build on this momentum, even as it calls on them to implement the Paris Agreement, come prepared to assess their collective progress in 2018 and trigger a process to ratchet up climate ambition by 2020. As the next hosts of the G20, civil society expressed its support for Argentina to take forward the climate agenda.

Manuel Pulgar-Vidal, leader of WWF’s Global Climate & Energy Practice, said: “Despite US pressure, world leaders at the G20 Summit showed they are serious about creating an equitable transition to a decarbonised world by by sending a strong signal on the Paris climate agreement. The Action Plan on Climate and Energy for Growth attached to the Communique is the most detailed climate to-do list we have ever seen from the G20. Now it’s about taking concrete action within and between countries, building on existing efforts by business, cities and civil society and amplifying those through true governmental leadership.”

Sven Harmeling, Climate Change Advocacy Coordinator for CARE International: “CARE welcomes the G20 leaders’ greater attention to the climate crisis. The clear commitment by 19 of the G20 members to implementing the Paris Agreement is an important signal, but it requires greater action, immediately, to live up to the group’s responsibility.

“The endorsed Action Plan on Climate and Energy for Growth, though by far not sufficient to tackle the climate crisis, can help achieve the goals of the Paris Agreement. Alongside much stronger and more rapid emission cuts through shifting away from fossil fuels, this must prioritise greater efforts and support to protect vulnerable people, especially poor women and girls, from climate disruption and the human suffering it creates.”

Wendel Trio, Director, Climate Action Network (CAN) Europe: “We welcome the continued commitment of our leaders to the Paris Agreement. The adoption of the Climate and Energy Action Plan is a clear indication that the world’s largest economies are well aware that action is urgently needed to make the zero carbon transition happen.

“The next step is obviously to move from commitment to action, by raising the level of ambition of the Paris pledges, phasing out fossil fuel subsidies by 2020 and providing support to those most vulnerable to climate change impacts.”

Christoph Bals, Policy Director, Germanwatch: “The G20 has passed the first part of the Trump Test on climate. 19 leaders in Hamburg stood united in their commitment to the Paris Agreement and its swift implementation. President Trump tries to undermine the Paris Agreement, but instead he has further isolated himself. His objective to sell American fossil fuels to the world received a hard reality check at the G20.

“In the Communiqué, even the United States accepted a commitment to a global transition towards low-greenhouse gas emission energy systems consistent with the UN Sustainable Development Goals (SDGs). This includes SDG 7 which aims to substantially raise the share of renewables and double the improvement rate for energy efficiency by 2030. The future belongs to energy efficiency and renewable energy. The second part of the climate test will come at home. For Germany, this means agreeing on a planned phase-out of coal and a transition strategy for the transport sector.”

Alex Doukas, Senior Campaigner, Oil Change International: “Rightfully, other G20 leaders put Donald Trump in the corner for a time out over his absurd climate change denial. They deserve credit for standing united behind the Paris Agreement. Yet talk is cheap, and unfortunately the G19 failed to take action to demonstrate that they’re serious about climate action by actually ending handouts to the fossil fuel industry, instead of once again offering the same tired ‘commitment’ backed by little action. All fossil fuel subsidies must end by 2020 – a crucial step that civil society groups, major investors, and big insurers are all pushing for.”

Sasanka Thilakasiri, Senior Policy Advisor, Oxfam: “With the other 19 members firmly defending the Paris Agreement as ‘irreversible,’ President Trump’s stubborn insistence on propping up the fossil fuel industry leaves him isolated and stuck in the past.“

Alden Meyer, director of strategy and policy at the Union of Concerned Scientists: “The G20 summit provides another powerful demonstration that the rest of the world is moving ahead with climate action, leaving President Trump isolated following his ill-advised decision to withdraw from the Paris Agreement.

“Other leaders understand that climate change threatens the prosperity and wellbeing of their citizens, and are eager to capitalise on the tremendous economic opportunities offered by energy efficiency and renewable energy solutions.
“The Hamburg Climate and Energy Action Plan – endorsed by all the other countries attending the summit – provides a roadmap for implementing and strengthening the commitments that countries made in Paris, as is needed to avoid the worst impacts of climate change. Adoption of the plan, along with the declaration by all other leaders that the Paris Agreement is ‘irreversible,’ shows that President Trump’s ‘fossil fuels forever’ agenda is failing to get any traction, no matter how hard he tries to cling to it.

“President Trump may have forced inclusion of language in the communiqué on access to and use of fossil fuels by threatening to block the whole text if he didn’t get his way, but that will do nothing to slow the accelerating shift away from polluting fossil fuels towards a global economy powered by clean, renewable energy.”

Mohamed Adow, Christian Aid, International Climate Lead, said: “After this G20 summit, there’s no doubt that the world’s largest economies are taking climate action seriously. The message from world leaders in Hamburg is clear: Donald Trump’s isolationist stance on climate policy is simply not going to derail plans to implement and advance the Paris Agreement.

“The US President’s weak attempts to capsize the climate movement have failed: he is now marooned on a political island of his own making, with his head buried in the sand. Meanwhile the rest of the world is moving ahead, having outlined a comprehensive Climate and Energy Action Plan which allows them to get on with the business at hand – the transition to a green economy.
“The G20 (or G19) have collectively sent a strong signal that they’re committed to implementing and advancing the Paris Agreement, and that they’re working together to deliver better growth, prosperity and stability. They have proven that the global evidence-based values which bind us together, and which allow us to confront global challenges, are secure.”
“We are pleased that the EU and China – two of the world’s top three biggest economies – have demonstrated their commitment to steer the way towards a low-carbon economy. Their leadership – and that of Angela Merkel’s – has strengthened the global resolve to make a big shift away from dirty energy. Now, perhaps we can finally shift gears from just defending the Paris Agreement, to enacting it and delivering at home.”

Greenpeace International: “The G19 held the line, defending the Paris Agreement against Trump’s backward decision to withdraw, but that is not enough. The G19 should have committed to accelerate the transformation away from coal, oil and gas. If Paris was the starting point, Hamburg must sow the seeds of much greater ambition.
“Millions of people suffering from the impacts of climate change are demanding urgent action to end the age of coal, oil and gas. To put words into action, the G19 must now accelerate the clean energy transition and set sail from Hamburg with an agenda of change.
“Merkel, as G20 host, helped secure a united G19 outcome, but she must now lead the way at home and end Germany’s reliance on coal by committing to a socially just coal phase-out by 2030.”