Countries on Sunday in Geneva, Switzerland will begin a fresh round of UN climate change talks as they continue work to advance the draft text of a new, universal climate change agreement which they are due to conclude at the end of this year. 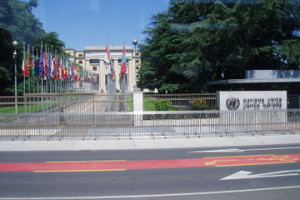 It entails the meeting of the Ad Hoc Working Group on the Durban Platform for Enhanced Action (ADP) holding in the UN Palais des Nations. It will come to a close on Friday.

The ADP is the negotiating body tasked with building the new agreement, which governments are due to deliver at the end of the year in Paris.

The Paris agreement will come into effect only from 2020, so the ADP is also finding ways to increase immediate climate action to cover existing gaps in global ambition to respond effectively to the climate challenge.

The world needs to achieve a three-part goal, if it is to prevent average global temperatures from rising more than 2C degrees, beyond which increasingly unmanageable climate impacts on societies and economies are likely to  occur.

“We must peak global greenhouse gas emissions as soon as possible, trigger a deep, de-carbonization of the global economy and eventually reach a climate neutral world in the second half of this century,” said Christiana Figueres, Executive Secretary of the UN Framework Convention on Climate Change (UNFCCC).

The Geneva meeting follows the annual UN climate change conference in Lima last December where countries made progress towards the final text for the Paris agreement by capturing the elements of a draft negotiating text. This is referred to as the Lima Draft. The Lima Draft contains different options for the Paris climate agreement from all countries.

In Geneva, governments will also continue to consider how to increase climate action before 2020 though Technical Expert Meeting (TEMs). A series of such meetings took place in 2014, focusing on areas such as renewable energy, energy efficiency, cities and land use.