Ethiopia considers access to the Nile waters and transparency on any future development of the river to be sovereignty issues that are non-negotiable, Ethiopian Ambassador to South Africa, Shiferaw Teklemariam Menbacho, told Sputnik.

Egypt, Sudan, and Ethiopia have been at loggerheads over The Grand Ethiopian Renaissance Dam.Ethiopia announced last year that it began filling the dam’s reservoir, which was protested by Egypt.

“Let us use the Nile waters among ourselves without significant harm to each other” is an unwavering stand by the Ethiopian government.

“Ethiopia’s position accommodates all but the perpetuation of the colonial legacy of 1959 Nile treaties and any hindrances on future development on Nile waters.

“These two are sovereignty issues and non-negotiable,” the ambassador said.

Access to the Nile has long been a thorny issue for the riparian countries.

The 1959 water allocation agreement shared all of the waters between Egypt and Sudan, with some set aside for evaporation.

However, Ethiopia and other upstream states were not featured in that agreement.

Egypt, strongly dependent on the Nile for its private and business water needs, fears that the dam may affect the river flow.

Ethiopia has explained that there will not be any significant impact on the flow and argued that it should be able to use the river to boost its economy and living standards.

The three countries have yet to agree on the role the dam can or should play during the droughts. 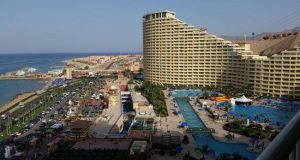 An initiative that deploys volunteer medical students in Sudan to treat COVID-19 patients in their ...