Community participation as a way out for Makoko

February 25, 2013 Comments Off on Community participation as a way out for Makoko 22 Views

Makoko is a slum settlement that is home to fishermen and other low income earners, which the authorities see as a blot on the cityscape, one that would have to go if Lagos is to attain its much-vaunted mega city status.

Last July, government agents moved in to demolish portions of the sprawling lagoon slum, amid claims that the residents were living dangerously – under the high-tension electric wires supplying power to the highbrow Victoria Island and Lagos Island.

With the action being predicated on a notice, which according to press reports was dated July 12 2012, observers felt the government reaction was high handed and a push for it to stop the demolitions soon began.

The Social and Economic Rights Center (SERAC), a non-governmental organisation (NGO), was at the forefront of efforts to get the government to show a more humane outlook to the issue. The demolition stopped, but observers believe that it is only a matter of time before government returns, perhaps with more determination to remove the settlement.

Perhaps with this inevitability in mind, the Heinrich Boll Stiftung (HBS) is promoting a scheme designed to address inherent flaws, on the heels of a workshop held last November in Lagos to discuss burning issues. A fresh phase commenced last Wednesday, courtesy of a daylong meeting at Makoko that featured residents and experts involved in the project.

The HBS is a German, legally independent political foundation affiliated with the German Green Party.

Variant of a floating school proposed for Makoko

The November forum centred on climate resilient strategies for environmental design, as well as the plight of the people of Makoko and how it could be best addressed. Numerous presentations were made at the event.

However, a presentation by an urban planner and lecturer at the Department of Urban and Regional Planning of the University of Lagos, Omoayena Yadua, seemed to have met the workshop organisers’ requirement for tenable proposals that could define a roadmap for community engagement to ensure the sustainability of proposed ideas. She laid emphasis on stakeholder involvement/engagement and a bottom-up approach to addressing issues.

She said: “My presentation was on the stakeholders approach and talked about integrated approach to solving climate change problems like flooding. We identified every private citizen, government, corporate and professional angle. We identified that the government alone cannot tackle it, citizens alone cannot embark on solutions and the professional too cannot provide solutions that would not be adopted by both the government and the citizens.

“So we adopted a holistic approach, which was created in a triangle showing arrows connecting the professionals, the people and the policy makers. We proposed that that is going to give us a sustainable solution because the people will agree to what they were involved in. The government is going to be in agreement with a policy they jointly formulated and the professionals – we the planners, architects and others – will be able to learn from the lessons from the people and the past lessons from the government in trying to implement such solutions.”

According to her, the intervention entails involving the end users and the government in whatever changes to be introduced and to ensure they are part of the planning.

“This is because if we design the floating cities and the government does not approve of it, even if the people do, that design is forfeited. But if the designers, planners and the government come together and the government gives its word that it would support the project, success would be achieved. However, if we work in isolation then we can never be sure of success and may end up with a stalemate,” she added.

Last week’s integrated stakeholders meeting sought to analyse the causes of flooding, its effects and possible solutions to flooding in the neighbourhood.

Residents identified the possible causes of flooding; asserting that they had good waste disposal habits and that refuse and filthy environment usually associated with the study area was as a result of the aftermath of flooding. They also said that it damaged life and property and also endangered their health. Business activities are negatively affected thus reducing their economic capabilities, they added.

They proposed the demolition of houses situated on the natural drainage channel, dredging/ clearance of the drainages (canals), weed control and construction of embankments as solutions.

“The points were noted by the urban planners and would be considered when coming up with the set of conceptual plans which would be presented to the residents in a fortnight. Representatives of the Ministry of the Environment and Ministry of Physical Planning are scheduled to attend the next stakeholders meeting,” disclosed Yadua.

At the November workshop, Kunle Adeyemi, whose floating school project was funded through the research stage by HBS, as a social design intervention in Makoko, was on hand to show how interacting with the people in their environment led to the development of his pet project.

From a single flood resilient school now under construction, Adeyemi, an architect, is looking at a significant upgrade of the entire community from stilt buildings to aesthetically pleasing and architecturally conceptualised floating buildings. He said that his innovation would not just transform Makoko from a slum settlement into a modern settlement, but would make it a standard for the rest of the world.

His slides at the presentation showed a different Makoko, one with uniformity and the sort of organised layouts that seem not readily evident in Nigerian cities.

There were other presentations on water-resilient building designs and strategies, as well as proposals for sustainable urban drainage systems, especially of the type that could be implemented on short notice without having to tear down the urban-scape in developing nations.

Just as they did with the floating building concept, the designers and architects came up with various innovative means of flood control in urban areas. The proposals were also developed with cost in mind and utilisation of items sourced from the immediate environment was key.

HBS had called for entries from architects, designers and anyone interested in providing solutions to the specified problem. Of the proposals submitted, nine respondents were invited to be present their proposals at the open space workshop.

Community participation was a critical criterion at the workshop. 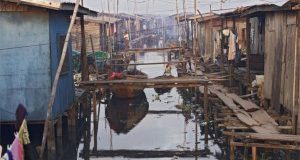 Secret of healthy living at Makoko

As a way of improving the quality of education in a sustainable way, the United ...