January 2, 2018 Comments Off on Communication and Development: Promoting science for sustainable livelihood 1,011 Views

Goal 17 of the Sustainable Development Goals (SDGs) advocates for equitable access to science, technology and innovation particularly in Less Developed Countries (LDCs). In this write-up, Coordinator, Journalists for Social Development Initiative (JSDI), Etta Michael Bisong chronicles what his organisation is doing to promote this goal and ensure sustainable living 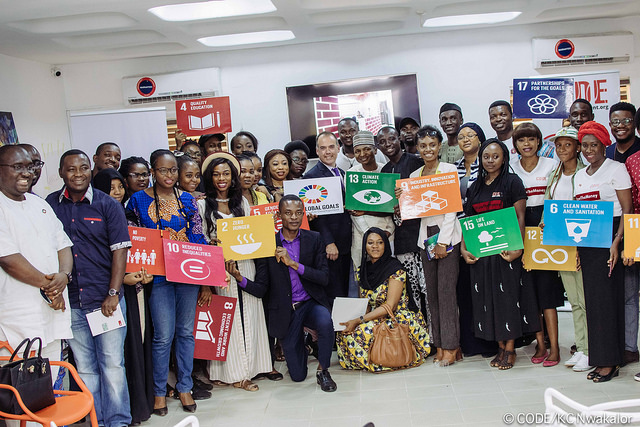 What motivated the Science Café

In Nigeria for example, we are all witnesses to the various massive breakthroughs and how new technologies have transformed human affairs. This transformation is manifest weather in finance management (online banking), education (eLearning); medicine (eHealth) and most recently in agriculture where plants are modified to mitigate ecological challenges. It is a new kind of phenomenon that has redefined human association and relationship.

Sadly, however, science & technology has continued to face public resistance despite these phenomenal milestones. We have seen lots of contradictions raised by scientists and non-scientists alike against some scientific innovations particularly in agriculture where they disagreed vehemently over the health, as well as environmental safety of these technologies.

These contradictions without managing words have in numerous ways bedeviled the rapid penetration and prevented the public from fully accessing the potentials of science & technology to enhance everyday life.

It is for this reason that the Science Café is motivated. Our objective is to create a platform to improve science literacy and help the public access the full benefits associated with modern technologies to promote the concept of decent living as enshrine in goal 17 of the Sustainable Development Goals (SDGs).

How Café will address anomalies

Firstly, I will like to establish that most of these contradictions and arguments raised are not based on scientific evidences; they are driven by sensation while many others are caused by the insufficient public knowledge around the concept of science & technology.

Science as a method is empirical in nature; it is fact driven and explainable. It is worthy to note that science is the single but most effective of all human discoveries including religion that has being accepted based on its ability to prove, explain and even replicated globally.

For this singular reason, the responsibility of delivering mandate of the science café becomes very simple. The café is departmentalised into three components which include a science hangout, and weekly radio/TV talk show, as well as the Science Digest, a monthly publication that captures all the happenings in the science & technology sphere for the purpose of knowledge sharing and public enlightenment.

The science café will through these channels engage and create debates that promote information that are based on scientific methodology. It will serve as a hub for science communication bringing together stakeholders such as scientists, journalists, civil society groups and key industry actors to demystify the myths that have characterised science & technology and prevented it from meaningfully contributing to sustainable growth.

Goal 17 of the SDGs is designed to strengthen the means of implementation and revitalise Global Partnership for sustainable development. One of the primary targets of this goal is to enhance North-South, South-South, and triangular regional and international cooperation on and access to science, technology and innovation and enhance knowledge sharing on mutually agreed terms, including through improved coordination among existing mechanisms and global technology facilitation.

This goal advocates for the development, transfer, dissemination and diffusion of environmentally sound technologies to developing countries on favorable terms, including on concessional and preferential terms, as mutually agreed.

It also canvasses for the full operation of the technology bank and science, technology and innovation capacity-building mechanism for least developed nations by 2017 and enhance the use of enabling technology particularly information and communications technology.

No doubt, this is an ambitious task to deliver. Diverse stakeholders must come together to help use the available resources to achieve this anticipated targets mostly as it relates to less developed countries where the technological divide in unimaginable when compared to developed nations. Today, 2017 is already history and yet there are no visible results to justify this goal as encapsulated under the 15 years development agenda.

Journalists for Social Development Initiative (JSDI) as an organisation established to promote developmental communication is aware that its mandate cannot be achieved without external support. Our partnership with Connected Development (CODE) is an expression of this belief.

Previously, we have worked with several other organisations including the embassy of Ecuador in Nigeria, as well as the Open Forum on Agricultural Biotechnology (OFAB), Nigeria chapter to engage the public and train journalists on science reporting.

We are very happy and proud of CODE for their generosity to work with us. This is the kind of gesture that is required to help direct and deliver our assignment. JSDI, under this agreement, will oversee all the technical operations of the café, while CODE will serve as host and provide other necessary requirements to make sure that this noble initiative transforms from abstract to concrete.

It is important to note that they are huge challenges on this pathway, which is why we conceptualised the science café to help mitigate and provide the right environment for the proper deployment of modern technologies to excel and make the world a better place.

The Café’s projection and future expectations

The science café is expected to be officially unveiled on Thursday, January 18, 2018 in Abuja with special focus on “Science, Technology and Modern Society: Role of Communication in Promoting Sustainable Livelihood”.

Our projection is to create a hub and become a leading agency for the provision of accurate as well as reliable science based information. The primary problem responsible for the public resistance of most scientific innovations in society is caused by insufficient awareness on the principles of science & technology.

We expect to strengthen our partnership with CODE at this pilot stage while seeking for more support from other development partners.

Industry players both at the government and private sector level must understand that we now live in a global village where all human affairs are determine by technology. So, we look forward to engage and work with more development actors, in particular the media and policymakers to promote laws that provide the right atmosphere for the effective deployment of science & technology to deliver goal 17 of the SDGs.

Like Loading...
2018-01-02
admin
Previous: Community lauds anti-open grazing law in Benue
Next: Herdsmen kill over 20, injure over 30 in Benue