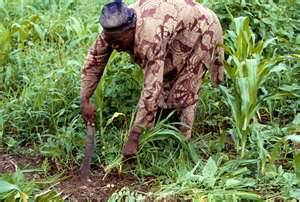 Almost all African countries are vulnerable to climate change. This is owing to their low adaptive capacity, including ever-growing dependence to on such resources that are sensitive to changes in climate.

Resulting from this, climate change threatens to inflict suffering on African nations as well as reverse the development gains that have been recorded over the years.

For example, Nigeria’s economic growth is principally based on oil, which is a climate-sensitive sector. Mining and agriculture are some others.

The WHO’s projection of an “approximate 250,000 additional deaths per year from malnutrition, malaria, diarrhoea, and heat stress” as a result of climate change means a retardation of development efforts in Africa.

According to Africa Adaptation Knowledge Network (AAKNet), 96 percent of sub-Saharan Africa’s population is dependent on rain-fed agriculture. In some countries, crop yields are predicted to fall by 50 percent by 2050.

Arable land is predicted to decline by six percent, which means that “food security and access to food will be severely compromised by climate change and poor rural communities and poor countries with the least financial, institutional and technological capacity to adapt will face the worst impacts.”

The introduction of agroforestry in agricultural systems will help, in no small measure, in mitigating climate change impact for rural farmers.

“An increase of arid and semi-arid land of five to eight percent is projected for Africa by 2080,” is stated.

Although the actual percentage of Nigeria’s land degraded by desertification is not ascertained, it is estimated that 43 percent of the total land area is suffers from the environmental menace.

It is therefore imperative for “a multi-tier approach to be employed in order to build capacities of governments and communities in Africa to effectively respond to and adapt to climate change.”

The Network recommends that: “the assessment of social and economic vulnerabilities needs to be strengthened so as to inform processes for identifying adaptation priorities.

“There is a need for national adaptation policies that provide clear guidelines for integration and implementation of strategies, programmes and activities.

“Mainstreaming climate change into economic frameworks and sectoral policies is of paramount importance in order to ensure integrated adaptation responses,” and

“There is a need for increased adaptation funding at local and national levels with priority to such vulnerable groups as smallholder farmers, etc.
By Abdallah el-Kurebe (Regional Editor, Newswatch Mag., +2348065887777; Skype: damyiloh)