Climate change: What does 1.5℃ mean for Nigeria?

“As a child, I’ll go across Lake Chad on a hovercraft and think I’m going to England, today it’s a poodle.”

Those are the words of Minister of Environment, Amina J Mohammed. That was many years ago. But, today, the story is different. Climate change has exacerbated the shrinking of Lake Chad since the 1960s from a total area of 25,000 km2 in 1963 to about less than 3,501 km2, according to Scientific American 2001. As a result of this, sources of livelihood and income have been cut short, causing conflict and unrest in the surrounding area. There is even the possibility that this is one of the causes of Boko Haram. 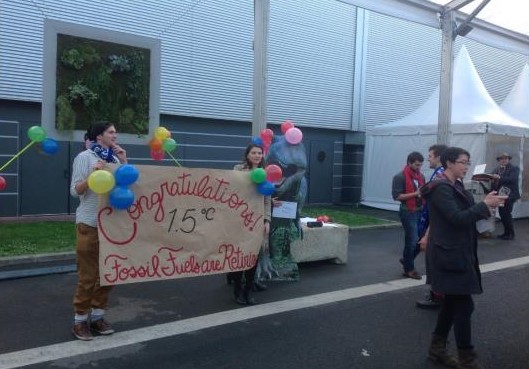 People celebrating in Paris when the limit of temperature to 1.5℃ was accepted during COP21 in Le Bourget. Photo Credit: Chinma George

Climate change is upon us all, it is no respecter of person, status, country and region. Africa, that did not contribute to historical and present emissions, is one of the most vulnerable regions to climate change. The continent has seen an increase in droughts, water stress, inequality, flooding and other negative effects of global warming and climate change.

What scares me the most are women, youth and the poorest people who are often marginalised. What will they do? How will they cope?

Islands are already disappearing; each successive month is declared hotter than the previous; July 2016 was the hottest month in the world’s record according to National Aeronautics and Space Administration (NASA) Goddard Institute for Space Studies (GISS) in New York.

“It appears almost a certainty that 2016 also will be the warmest year on record,” according to GISS director, Gavin Schmidt.

This warming is affecting Nigeria gravely with increase in desertification in the Northern states, salt water intrusion as well as flooding in the south and destruction of coastal communities by storm surges. Action has to be taken urgently by developed countries to reduce their emissions.

Following the success of the Paris Agreement and its entry into force just before the 22nd Session of the Conference of Parties (COP22) in Marrakesh, Morocco from the 7th -18th of November 2016, more sanctions and actions have to be taken, as countries are still opening coal plants.

How are we going to curb emissions and limit temperature increase with such developments?

To put temperature increase to 1.5℃ might be a bit too late as research already shows a 1℃ increase from pre-industrial levels in 2015. The temperature of the first months in 2016 was said to be about 1.38℃ – 1.4℃, showing that the possibility of warming reaching and exceeding 2℃ is likely, sooner than we thought.

Carbon Brief in an analysis stated that we have fivve more years before we finish our 1.5℃ budget. What is worrisome is that the difference of .5℃ would bring about more calamities that are detrimental to ecosystems and the environment.

Throughout this year global awareness of climate change has been at its peak. A video on climate change was shown at the opening of the Olympics, the 71st Session of the UN General Assembly created a platform for countries to sign and ratify the Paris Agreement and, finally, Hollywood actor Leonardo DiCaprio produced a movie on climate change.

Is this enough for developed countries and emerging economies like India, Brazil and China to reduce their emissions? Ecosystems are already at risk and species are disappearing – should we wait till it’s too late before drastic climate action is taken?

Like Loading...
2016-10-13
admin
Previous: Platform to support SDGs financing emerges
Next: How to refocus nation’s renewable energy drive, by stakeholders