Biden, at climate summit, pledges to halve U.S. emissions by 2030

U.S. President Joe Biden on Thursday, April 22, 2021 pledged to cut U.S. greenhouse gas emissions in half by the end of the decade compared to 2005 levels.

The promise came at an online summit Biden convened with 40 world leaders aimed at getting major economies to set more ambitious carbon-slashing goals.

The two-day meeting, which opened on Thursday, is seen as important preparation ahead of the next UN climate crisis conference to be in Glasgow in November.

Chinese President, Xi Jinping joined the videoconference, in what is seen as a goodwill gesture after a rocky start to Beijing’s relationship with the new administration in the White House.

China is the world’s biggest emitter of carbon dioxide gases, followed by the United States, India and Russia, according to the International Energy Agency, a Paris-based group.

Xi delivered a speech’ to his counterparts.

Biden announced his intention to cut emissions by between 50 and 52 per cent at the economy-wide level.

The pledge doubles the promise made by former president Barack Obama but gives the current administration five more years to meet its goal.

In 2015, the U.S. had committed to reducing greenhouse gas emissions by 26 to 28 per cent by 2025, compared to 2005 levels as a contribution to the global Paris Agreement.

One of Biden’s first acts in office was to return his country to the 2015 climate accord, which his predecessor, Donald Trump, had pulled from.

It said cutting tailpipe emissions boosting vehicle efficiency standards, and investing in transportation infrastructure and new technologies would help get the U.S. on track.

Another priority is to focus on heavy cuts to emissions of methane, a major contributor to global warming.

Biden had previously announced the goal of reaching “100 per cent carbon pollution-free electricity by 2035’’ and a net-zero U.S. emissions economy by no later than 2050.

On Wednesday, the EU officially committed to at least a 55 per cent reduction in emissions by 2030 compared to 1990 levels.

Britain, meanwhile, said earlier that it was aiming by 2035 to reduce emissions by at least 78 per cent below 1990 levels.

British Prime Minister, Boris Johnson, expanded further on his pledge at Thursday’s event and urged other countries to use 2021 as a time to set their ambitious plans.

“If we actually want to stop climate change, then this must be the year in which we get serious about doing so.

“Because the 2020s will be remembered either as the decade in which world leaders united to turn the tide, or as a failure,’’ Johnson said.

Japanese Prime Minister Suga Yoshihide said on Thursday his country would aim to reduce greenhouse gas emissions by 46 per cent from 2013 levels by 2030, according to broadcaster NHK.

Suga also said Japan planned to be carbon-neutral by 2050.

More than 120 countries have made net zero commitments to date, covering 65 per cent of global carbon emissions.

But scientists say the world is not collectively moving fast enough to avert the worst effects of climate change by keeping warming to below 2 degrees above pre-industrial levels.

The World Meteorological Organisation said in January that the world was on pace for “a catastrophic temperature rise of 3 to 5 degrees Celsius this century’’ unless urgent action was taken. 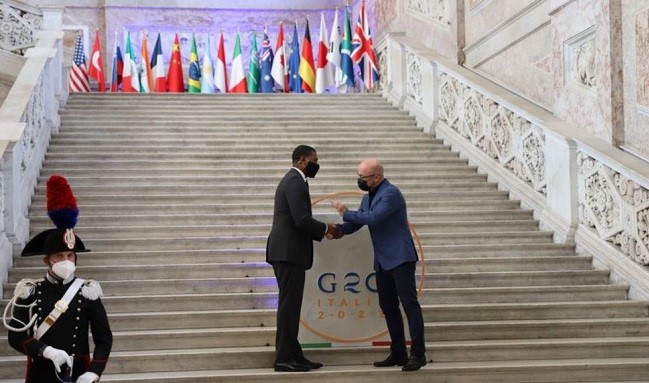 Energy and environment ministers from the Group of 20 rich nations have yet to agree ...