October 6, 2016 Comments Off on Bassey, Shiva others for Monsanto Tribunal, People’s Assembly 1,085 Views

Indian scholar, environmental activist and anti-globalisation author, Vandana Shiva, in the company of several other campaigners like Nigerian architect and rights activist, Nnimmo Bassey, will be main speakers at the Monsanto Tribunal and People’s Assembly scheduled to take place at The Hague from 14 to 16 October 2016. 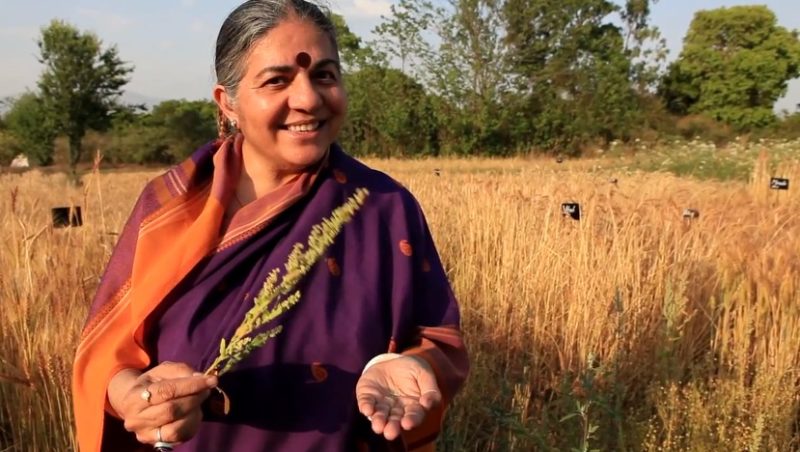 Navdanya, the organisation founded and led by Shiva, is co-organising the event, along with multiple civil society organisations.

The Monsanto Tribunal will hold Monsanto accountable for alleged crimes against humanity, human rights violations and ecocide, in tandem with the People’s Assembly, a gathering of leading movements and activists working to defend earth’s ecosystem and food sovereignty, to lay out the effects of industrial agrochemicals on lives, soils, the atmosphere and climate.

Over 800 organisations from around the world are supporting and participating in this process while over 100 people’s assemblies and tribunals are being held across the world.

Navdanya, a movement for Earth Democracy based on the philosophy of “Vasudhaiv Kutumbakam”, disclosed in a statement: “In the last century, giant agribusiness interests which came out of the war industry, have poisoned life and our ecosystem, are destroying our biodiversity and the lives of small farmers, appropriating their land, in an attempt to control and profit from these essentials for life on earth. The risks keep increasing as these multinationals diminish in number as a result of aggressive takeovers and mega-mergers – such is the case with the recent $66 billion Bayer-Monsanto merger. A merger which serves to further extend the control of these multinationals over agricultural and food production systems. There is only one way to translate this process: maximum focus on potential profit, and a minimal concern towards the environment, to the quality of our food, to consumers and to workers in the sector.

“Large multinationals are lobbying democratically elected governments to take on neoliberal policies and international ‘free’ trade agreements such a TTIP and TTP: the race towards deregulation is an unprecedented attack on biodiversity and to life itself on Earth.

“Multinationals like Monsanto have already expanded their control over our seeds, our food and our freedom, depriving us of our basic human rights and our right to democracy. With patents and international property rights (IPRs) as their tools, they have established monopolies and threatened the rights of farmers and consumers.”

Participating at the People’s Assembly, according to the group, will be leading representatives of movements and associations, seed custodians, farmers and journalists from all over the world. The aim of the Assembly, it adds, is to shine the light on crimes against nature and humanity of mega chemical and biotechnological industrial corporations which through patents on seed have opened the doors to the invasion of GMOs.

Based on the ecocide and genocide of the past century, the Assembly will lay out the necessary actions for a future based on the rights of small farmers to save and exchange seed, on self determination of food, on agroecology, the rights of consumers and workers in the sector, on the commons and a sharing economy, as well as on the rights of nature and a true Earth Democracy.

Like Loading...
2016-10-06
admin
Previous: Paris Agreement: Consequences of entry into force
Next: Seven Catholic institutions to divest from fossil fuels