Over 300 participants representing various interest groups on the continent including governmental and non-governmental organisations, academic, media, women, lawyers and youths have underscored the need for African member-states to integrate the Paris Agreement into Africa’s development agenda and other global governance frameworks. 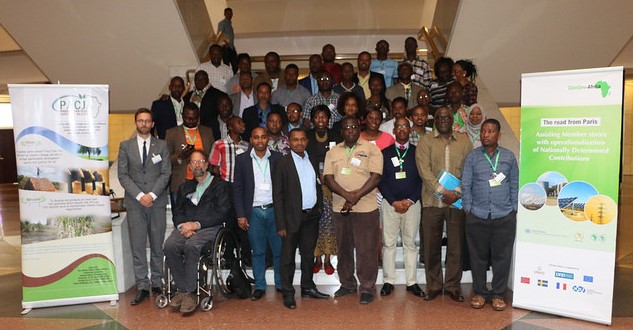 A group of participants at the CCDA-VI

This came out strongly on Thursday as the sixth conference on Climate Change Development in Africa (CCDA-VI) ended in Addis Ababa, the Ethiopian capital.

The CCDA-VI, which began on the 17th of October 2016 on the premise of facilitating science-policy dialogue and providing a marketplace for innovative solutions that integrate climate change into Africa’s development processes, urged Africa to engage with and embrace the Paris Agreement within the framework of it’s development aspirations as underscored in Agenda 2063, which embodies the vision of the “Africa we want”, and the 2030 Agenda for Sustainable Development, which sets global targets with a vision of “leaving no one behind”.

Participants were also of the view that most of the intended nationally determined contributions (INDCs) submitted by African states require urgent revision ahead of the coming into force of the Agreement as many of them were vague and inconsistent with national development priorities.

Abdallah Hamdok, Deputy Executive Secretary of the United Nations Economic Commission for Africa (UNECA), said: “Analyses by various institutions, including the African Climate Policy Center, have demonstrated that there are still several challenges with the INDC submissions of many developing countries.”

In a similar vein, the Vice President of the African Development Bank, Dr. Kapil Kapoor, enjoined African states to ensure that the nuances in the Paris Agreement are clarified and contextualised in the run-up to COP22, especially in the case of Africa, whose greenhouse gas (GHG) emissions remain the lowest but which is already bearing the greatest burden from the adverse impacts of climate as evinced by the effects of the unusually strong El Niño of 2015 in East and Southern Africa.

Civil society groups under the auspices of the Pan African Climate Justice Alliance (PACJA) cautioned along the same line, urging Africa to utilise the window of opportunity the ratification period provides to revise their INDCs and while identifying strategies for implementing the Agreement especially through pan-African initiatives and institutions, public-private partnerships, and the engagement of state and non-state actors.

“Tackling climate change is therefore paramount if Africa’s development objective as defined in Agenda 2063 is to be achieved,” Mithika Mwenda, head of PACJA, said.

To James Murombedzi, Officer in Charge of the Africa Climate Policy Centre, “the Paris Agreement is somewhat weak in terms of how African countries will attract the required investments to deal with the challenges of climate change.”

While it was hailed as a landmark global deal on climate change, there remains a feeling of impotence from the Africa group on certain nuances of the Agreement and its implications to the continent’s development agenda.

However, signing and ratifying the Agreement is not optional for Parties as it was universally agreed by the then 196 members to the United Nations Framework Convention on Climate Change (UNFCCC) in Paris last year.

This therefore implies that Africa’s fears about the Agreement and its implications, would have to be dealt with at the negotiating table, and this is the point at which the Young African Lawyers (YAL) Programme becomes crucial.

Established under the ClimDev-Africa Programme, YAL has the overarching goal of strengthening Africa’s negotiating position and ensuring Africa gets the best at the UNFCCC processes.

“Signing and ratifying the Agreement is not optional for us as Africa,” says Natasha Banda, a young Legal Practitioner from Zambia, one of the mentees under the programme.

Being part of the legal advisory team for the Zambian negotiators through the UNFCCC country Focal point person, Banda believes ratifying the Agreement is not negotiable and the starting point “because the nature of international Agreements is that you cannot have bargaining power from outside,” and is certain that Zambia, which is yet to ratify, would do so once all necessary processes are complete.

Noting that climate-induced impacts like frequent and prolonged droughts and floods, as well as environmental degradation, have created uncertainties that make livelihoods unattainable for rural and urban communities, key speakers at the conference also identified migration as a trigger and amplifying factor.

The conference further recommended that the causal linkages between climate change and migration be better understood to take appropriate climate response measures to stabilise communities and improve livelihoods.

Examining the implications of the Paris Agreement for Africa’s future economic growth and sustainable development agenda; the conference called on African countries to identify viable and transformative investment opportunities, reform institutions to make them more efficient, and build capacity to access and absorb climate finance – in readiness to take advantage of the opportunities presented by the Paris agreement, to leapfrog technologies and transition to low-carbon, climate-resilient development.

In addressing and responding to the impacts of climate change on socioeconomic development and environmental degradation in Africa, several key regional initiatives have been developed and adopted across multiple countries through partnerships and joint implementation.

Pan-African initiatives such as the Africa Renewable Energy Initiative (AREI), the Africa Adaptation Initiative (AAI), the ClimDev-Africa programme and the Africa Great Green Wall) were identified as key pillars supporting the implementation of the Paris Agreement. Similarly, the Agreement provides a unique opportunity to synergise these initiatives for maximum impact and efficient management and use of resources.

The place of the youth and the future of developmental frameworks in Africa was also put on the front-burner at the conference as Youth leaders linked the success of any development agenda on the continent to the extent of its anchorage on young people.

“In terms of leadership transition, we are still lugging behind because our leaders don’t trust young people, they see them as a threat, they see young people as naïve…but we will rise and fight for climate justice and ensure that 2063 is a reality,” said Ibrahim Cessay of the Africa Youth Initiative on Climate Change (AYICC), a network of African youth organisations and individuals working on climate change & sustainable development.

And Abel Musumali of the ClimDev Youth Platform agrees with Cessay on the need to engage young people saying “climate change is about both short and long term planning, under for Agenda 2063 to be achieved, we should be involved now in solving the climate change problem which has a bearing on our future, otherwise, we are doomed.”

Agenda 2063 heralds Africa’s dream for development in the next 50 years. And Dr. Seth Osafo, former legal advisor at the United Nations Framework Convention on Climate Change (UNFCCC) secretariat, would like to see investments in scientific research especially for young scientists.

“We need to develop young people’s expertise at the highest level to contribute positively in their country processes. There are already some experts in all the other areas but we need a lot of research scientists, and I look forward to having a programme soon that could be mentoring young scientists for Africa to be much involved in the climate scientific governance framework considering that climate change threatens to hinder Africa’s aspirations as enshrined in the Agenda 2063,” concludes Osafo.