The African Development Bank (AfDB) and the Global Environment Facility (GEF) on Monday November 14, 2016 in Marrakech during the recently held UN climate change talks (COP22) reiterated their support to the African continent towards remedying its urban centres, which are being negatively impacted by the effects of climate change. 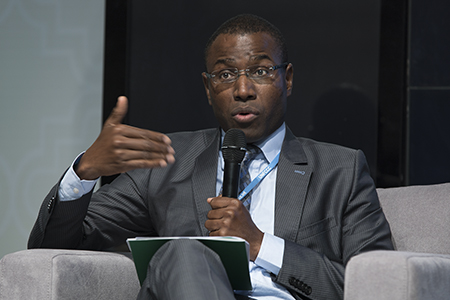 At a side-event on “Leveraging climate finance for urban resilience in Africa” held at the African Pavilion and jointly organised by both organisations, succour emerged in the horizon for the continent as the funding bodies pledged to redouble their efforts towards meeting the cost of climate change adaptation, which the UNFCCC projects to be in the range of $28-67 billion per year by 2030.

While the GEF stated that it would support Africa through the AfDB, the AfDB, on its part, promised to assist in accessing funding from partners.

“The GEF hereby commits to work more closely with African countries through the AFDB, our partner,” disclosed Dr Naoko Ishii, the GEF CEO and Chairperson.

She stressed that, apart from working with the AfDB, GEF also supports the Sustainable City Programme, which the AfDB is implementing in Abidjan, Ivory Coast. According to her, cities can be designed to be more compact to, for example, reduce the impact of flooding. Cities infrastructure can also be retrofitted to increase their resilience, she added.

Her words: “How can we do more? Leverage public and private sector money to finance projects, design cities in a more compact way and conserve resources as well as save money, help them to introduce de-risking investment, improve access to the capital market and catalysing private investment in energy efficiency investment.”

Speaking later, Amadou Hott, the AfDB Vice-President, Power, Energy, Climate and Green Growth, said: “Let me reiterate that the AfDB is committed to support the implementation of the Paris Agreement and support African countries to access funding from all partners including the GEF to meet their ambitions set in the NDCs.”

He stressed that the Paris Agreement recognises the major role that urban centres have to play in tackling change, adding that cities are now home to over half of the global population. The AfDB vice-president emphasised that, in Africa, urbanisation would increase exponentially over the coming decades, a development that has profound implications in the face of climate change, creating vulnerabilities to external shocks, including economic and climatic.

According to him, cities will need more capacity to absorb and recover from climatic shocks and stresses, but lamented that the expansion of cities is at the expense of forests and other natural environments or ecosystems, and comes with increase in pollution, and related diseases.

He listed the Bank’s “High Fives” or five priorities for Africa to include: Light up and power Africa; Feed Africa; Industrialise Africa; Integrate Africa; and Improve the Quality of Life for the People of Africa.

“To deliver on these priorities, the AfDB is working with the global climate funds including the GEF to assist African countries effectively adapt to the negative impacts of climate change. The Bank has mobilised funds from GEF’s Least Developed Countries Fund (LDCF) and the Special Climate Change Fund (SCCF) resources to address these increasing climatic threats, but this is only a small percentage of what is required. I am convinced that the GEF and AfDB partnership will deliver a new perspective of urban resilience in Africa.”

Mr Kehew, for instance, noted that the New Urban Agenda that was unveiled recently at the Habitat III conference in Quito, Ecuador recognises climate change as it relates to urban development. According to him, the previous Agenda was to a large extent silent on the climate change phenomenon.

His words: “The New Urban Agenda gives attention to climate change issues. The need for better urban planning was key to the agenda. While supporting access by organisations to climate finance, the NUA emphasises measures that strengthens the credit worthiness of cities.”

“We need to come up with solutions; we need to stay optimistic,” concluded Mr Lonsway.