A month after the Governor of Lagos State, Akinwunmi Ambode, announced government’s intention to demolish “shanties” along waterfronts across the state – and just days after the Lagos State High Court issued an injunction restraining the same – the authorities appear to have moved into action. 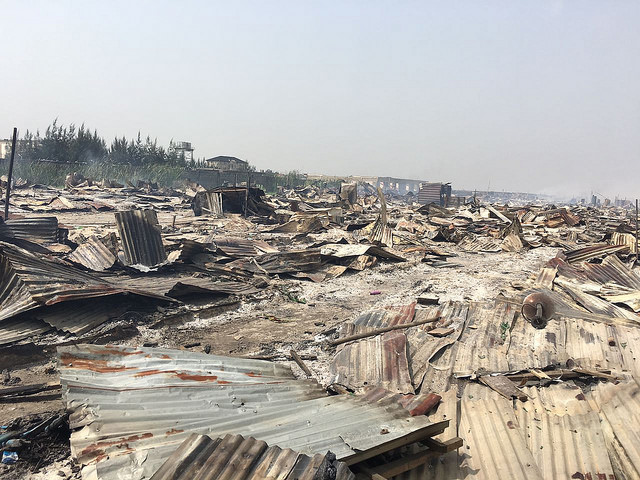 What is left of the Otodo Gbame community after the inferno

In the early morning hours of Wednesday, 9 November 2016, a gang of boys with reported ties to a powerful royal family, entered Otodo Gbame community – a fishing settlement on the edge of the Lagos Lagoon in Lekki Phase I, made up predominantly of Eguns and other ethnic minorities in Lagos – and began setting fire to houses in the community.

The police reportedly arrived the scene shortly thereafter but, according to eyewitness reports, instead of addressing the situation, opted to lend assistance to the spreading of the fire.

Megan Chapman, Co-Director of Justice & Empowerment Initiatives (JEI), said in a statement: “They shot into the community and chased away persons bringing water to quench the fire. They helped to set more structures on fire. Four persons – two women, one man, and one child – reportedly drowned as they rushed into water.

“It was only when help from other Egun communities around Lagos Lagoon such as Makoko and Oke Ira Nla arrived that residents began succeeding to put out the fire and police turned back.

“By the time JEI arrived in the Otodo Gbame, about a third of the community – an estimated 800 structures – had been razed to the ground and fires were still smouldering across the community. An estimated 10,000 people rendered homeless in a matter of hours tried to recover what properties they could and dozens of people huddled in boats off the shore of the community.

“At least 15 police vehicles were on ground and, around 1:30pm, the Commissioner of Police Fatai Owoseni arrived on the scene in person for ‘inspection’ and to order the community sealed.

“Interviews with affected residents throughout the day confirmed the complicity of the police in the spreading of the fire and loss of life in the early part of the day. They also indicate that police are working in tandem with those that initiated the fire to serve private interests of Otodo Gbame’s wealthier and more powerful neighbours. Residents pointed fingers at the Elegushi Chieftaincy Family and to the neighbouring International Children’s School.

“On 7 November 2016 – just two days before – Hon Justice Onigbanjo of the Lagos State High Court issues an injunction restraining the Lagos State Government and the Lagos State Commissioner of Police from demolishing waterfront communities – including Otodo Gbame – or evicting residents therefrom or otherwise giving effect to the 9 October 2016 eviction threat.

“As evening fell in Otodo Gbame, tens of thousands of residents – some newly homeless and some terrified but lucky to still have their homes – tried to get some rest after the wearying day. JEI-trained paralegals had delivered a copy of the subsisting injunction to the local Ilasan Divisional Police Station to ensure their awareness and pasted the order around the community.

“Shortly after midnight on 10 November 2016, however, JEI received reports from numerous residents of Otodo Gbame that a bulldozer with an escort of at least four police vehicles had started working to destroy remaining homes. There has been no indication that our efforts to notify the Nigerian Police Force at various levels – from Zone II Command to the Complaints Response Unit (CRU) in the office of the Inspector General of Police – have stopped the demolition ongoing with blatant impunity and disregard for life and wellbeing of citizens.”

According to Edukpo Tina, a young woman in Otodo Gbame interviewed in the early morning of 10 November by JEI, “Police came again after midnight with caterpillar [bulldozer] and started breaking everywhere, putting fire on peoples’ houses. They are seriously beating our people and threatening to shoot unless we leave. All of us are on top of water now, there is nowhere to go.”

According to JEI-Nigeria, it strongly condemns the actions of the Nigerian Police Force and any branches of the Lagos State Government or private parties at whose behest the NPF may be working.

The group adds: “We decry the extremely false and misleading press release issued by the Nigerian Police Force in the late afternoon of 9 November 2016 that seeks to characterise the police’s actions as a ‘rescue,’ while announcing that the community in question will be taken over by the Lagos State Ministry of Physical Planning and Urban Development and remaining structures will be demolished.

“We note that there is absolutely no legal basis for eviction or taking over of land in the aftermath of either security or fire incident. We further note there have been no statutory or paper notices whatsoever served on any residents of Otodo Gbame. Rather, the police are acting completely outside the scope of the law and in overt disregard for a subsisting order of court. We call on all conscientious citizens concerned for democracy and rule of law to join in condemning this action.”

While bodies of two persons drowned on 9 November have been found, others are however still missing.

Indeed, many of the evictees remain in the evicted areas, living in unsavoury conditions and subjected to regular police harassment. On Saturday 12 November, police reportedly came into the community and arrested two women for undisclosed reasons, and allegedly chased others into the lagoon. As at Saturday, about 100 structures on water were remaining where many were still squatting.

Last night (on Sunday), there were unconfirmed reports that the police visited the community yet again, allegedly setting fire to the remaining houses and have arrested someone obviously still staying there. It was gathered that when police came, he tried to show them a copy of the injunction protecting the community, but he was said to have been handcuffed and taken to the station.

On Friday, 11 November, the police reportedly went to a neighbouring informal area called Ebute Ikate and gave everyone three hours to pack out. Bulldozers came in with police and people not in uniform who were said to have started demolishing the entire area, affecting hundreds of houses and shops.

Following the alleged forced eviction, affected residents of Otode Gbame, those from nearby Ebute Ikate and indeed members of the Nigerian Slum/Informal Settlement Federation will on Tuesday (15 November, 2016)  stage a mass peaceful protest to the Governor’s Office at Alausa in Ikeja, the Lagos State capital.

“The peaceful protesters will include evictees from Otodo Gbame and residents of other waterfront communities and other Federation member communities across Lagos standing in solidarity with a number of civil society supporters,” stated Chapman.