The first global analysis of the whole of 2016 has confirmed last year as the warmest on record and saw the planet near a 1.5°C warming, according to the Copernicus Climate Change Service (C3S). 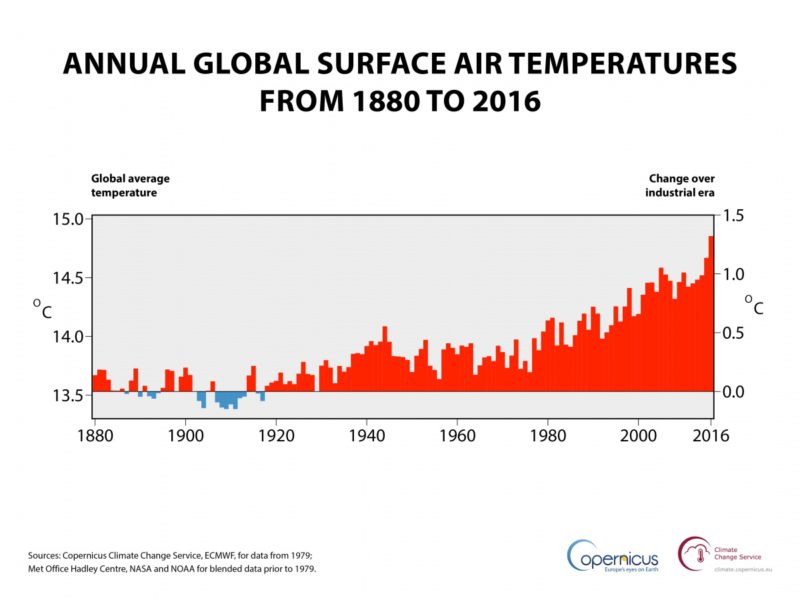 The latest figures from C3S, part of the EU’s Copernicus earth observation programme, show that 2016’s global temperature exceeded 14.8°C, and was around 1.3°C higher than typical for the middle years of the 18th century. 2016 was close to 0.2°C warmer than 2015, which was previously the warmest year on record.

Global warming, climate change increases the likelihood of extreme weather events such as heatwaves, droughts and floods. Future warming could cause billions of euros of damage each year and affect the availability of fresh water and crop yields in the most vulnerable countries. 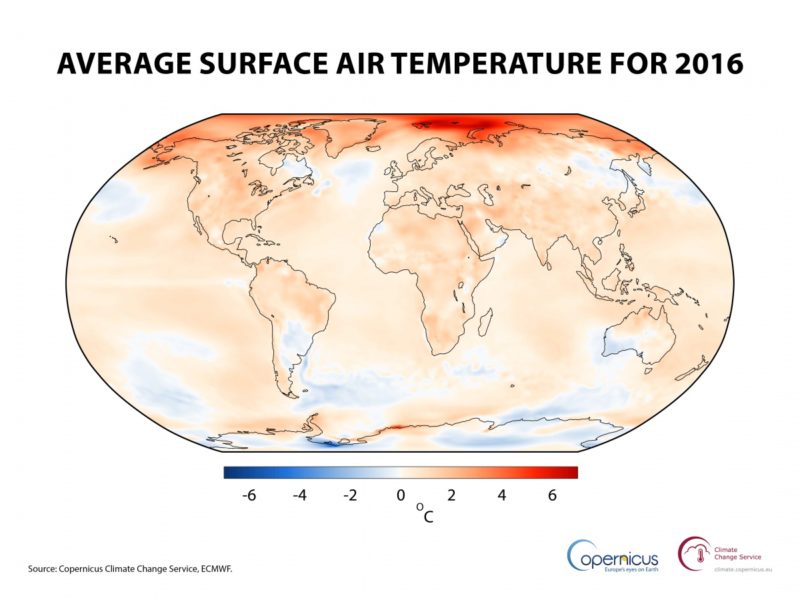 Director of ECMWF’s Copernicus Services, Juan Garcés de Marcilla, said: “We are already seeing around the globe the impacts of a changing climate. Land and sea temperatures are rising along with sea-levels, while the world’s sea-ice extent, glacier volume and snow cover are decreasing; rainfall patterns are changing and climate-related extremes such as heatwaves, floods and droughts are increasing in frequency and intensity for many regions. The future impact of climate change will depend on the effort we make now, in part achieved by better sharing of climate knowledge and information.

“To help decision-makers develop effective adaptation and mitigation solutions we make the data from Copernicus Climate Change Service (C3S) and the Copernicus Atmosphere Monitoring Service (CAMS) freely and openly available. By mainstreaming the information that the Copernicus Services hold into climate policy and strategy, governments, the private sector and society can identify and unite around opportunities to tackle further climate change and reduce vulnerability where its effects are unavoidable.”

C3S found that global temperatures in February 2016 already touched the 1.5°C limit, though under the influence of a strong El Niño, an intermittent event involving a period of warming. Global temperatures still remained well above average in the second half of 2016, associated partly with exceptionally low sea-ice cover in both the Arctic and Antarctic.

C3S found that most regions around the world experienced above-average temperatures during 2016. The largest differences in regional average temperatures were found in the Arctic but conditions were also extreme over southern Africa early in the year, over southern and south-eastern Asia prior to the summer monsoon, over the Middle East later in summer, and over parts of North America in summer and autumn.

In addition to record temperatures, ECMWF’s Copernicus Services monitored other extremes occurring in 2016, including significant global wildfires and the growth of CO2 in the atmosphere. Destructive fires were observed around Fort McMurray, Canada in May and then extensive wildfires across Siberia, associated with the year’s high surface temperatures, during June and July.

For the first year CO2 levels did not return below 400 ppm as summer turned to autumn in the Northern Hemisphere. In previous years, take-up of CO2 by vegetation during the summer growing season has typically seen September mark the lowest point for CO2 levels.

Annual global temperature variations derived from Copernicus data and from other widely used sets of data typically agree to better than 0.1°C for recent years. The spread in values is likely to be larger than 0.1°C for 2016 due to differences in the extent to which datasets represent the warm conditions associated with exceptionally low sea-ice cover.

The estimate used here is that the climatological average temperature around the start of the Industrial Revolution is estimated to have been 0.7°C lower than that for 1981-2010.

Copernicus is the European Commission’s flagship earth observation programme that delivers freely accessible operational data and information services. It provides users with reliable and up-to-date information through a set of services related to environmental and security issues.

C3S is run by ECMWF on behalf of the European Commission. ECMWF is an independent intergovernmental organisation, producing and disseminating numerical weather predictions to its 34 member and co-operating states.