In wealthy countries, paper is ubiquitous and is often fated to be discarded soon after purchase, with only a portion recovered for recycling. Although slow improvements have been made in production methods and in the recovery of paper products, additional progress is needed to reduce the industry’s environmental impacts, writes Michael Renner, senior researcher at the Worldwatch Institute, in the Institute’s latest Vital Signs Online article. 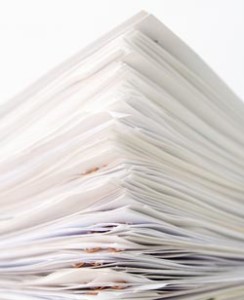 According to the United Nations Food and Agriculture Organisation (FAO), 397.6 million tons of paper and paperboard were produced worldwide in 2013. Most of the paper produced today (54 percent in 2013) is used for wrapping and packaging purposes, followed by printing and writing (26 percent), newsprint (7 percent), and household and sanitary tissues (8 percent).

Just four countries – China, the United States, Japan, and Germany – together account for more than half of the world’s paper production. The United States historically was the largest producer by far, but has since been eclipsed by China.

Paper consumption in North America, Europe, and Japan has declined in recent years, shifting to other parts of the world. But on a per capita basis, wealthy countries continue to use far greater amounts than developing countries do-on average, 221 kilograms (kg) in North America and 125 kg in Europe, compared with 45 kg in Asia, 43 kg in Latin America and the Caribbean, and just 7 kg in Africa, in 2012.

Paper recycling helps to reduce energy use and pollution. On average, fibres can be recycled five to seven times before they become unusable. Recycled paper requires 60 percent less energy and 80 percent less water to produce than virgin paper, and it generates 95 percent less air pollution. Recycling one ton of paper on average saves 26,500 litres of water, about 318 litres of oil, and 4,100 kilowatt-hours of electricity.

According to the FAO, recovered paper production totalled 215 million tons in 2013, equal to 54 percent of the world paper supply. This is up from about 20 percent in the early 1960s.

The pulp and paper industry is a large consumer of energy and water, as well as a user of toxic chemicals. In the United States, the paper industry is the third largest energy user among manufacturing industries, accounting for 11 percent of domestic energy consumption in 2010. Chlorine bleaching of paper can result in the formation of toxic compounds such as dioxins and furans. Since the 1990s, most paper mills in Europe and North America, as well as modern ones in China, have moved either toward elemental chlorine – a safer, although still harmful process – or toward totally chlorine-free paper.

Chinese paper producers have lagged in efficiency. In 2010, a typical U.S. or European paper mill used 0.9-1.2 tons of coal and about 35-50 tons of water per ton of pulp, while Chinese mills averaged 1.4 tons of coal and 103 tons of water. To reduce emissions and effluents, the Chinese government has mandated closure of the most polluting mills, while more modern mills have begun operations.

The Society of Landscape Architects of Nigeria (SLAN) has...

As part of their advocacy to promote child rights...

The UN is committed to assisting Nigeria attain the Sustainable...

UN urged to invite Heads of State to CBD COP15