Environmental activists and experts are of the view that deliberate efforts to tackle environmental challenges in Nigeria will help to check the wave of insecurity in the country. 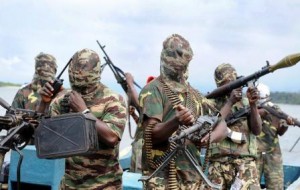 According to them, a large chunk of the insecurity around the world can be directly or indirectly linked to environmental issues such as pollution and desert encroachment. They argue that environmental pollution adversely affects farmlands and water supply, and erodes the people’s sources of livelihood, which in turn makes them susceptible to violence.

Supporting this argument, an environmentalist, Dr Desmond Majekodunmi, cited the case of the Niger Delta, where protesting youths are wont to blow up oil pipelines and kidnap oil workers, to express their grievance over environmental pollution caused by oil exploration and exploitation, as an indication of how environmental issues fuel insecurity.

Majekodunmi said one of the major causes of insecurity in Nigeria, and indeed in other African countries, is environmental degradation.

“When you have a situation like the one in northern Nigeria where climate change and unabated deforestation have caused the desert to move relentlessly and take over villages, definitely we are going to have hundreds of thousands of environmental refugees. So I am not surprised when they say that some hungry people in the north were given peanuts to carry out terrorist activities. Apart from those that are used by terrorists, take a look at the recurrent problems between the Fulani herdsmen and Plateau people. The Fulanis are looking for grasses to feed their animals, because the far north has been taken over by the desert. And the attempt by Plateau State residents to resist them (the Fulanis) has led to several fights, killing many people and destroying property,” he said.

The insecurity situation in Nigeria is concentrated in the Niger Delta and the North Eastern areas.

While residents in Niger Delta have lost their farmlands and the water meant for drinking and fishing to widespread pollution as a result of oil exploration and exploitation by multinational oil companies, those in the northern states have lost farmlands to rapidly encroaching desert.

Another environmentalist, Ayo Tella, believes that insurgency across the globe is environmentally induced. He said, “Over the years, youths in oil producing areas have posed serious security threat in the region, citing the destruction of their ecosystem by oil companies as their grievance.”

The media recently reported a protest by residents and environment stakeholders in Bayelsa State, which also served to renew the call on oil companies to clean up the pollution they caused or else vacate the region. The residents reportedly complained of the destruction of their sources of livelihood, such as fishing and farming which sustained them before oil exploration began in their region.

A visitor to communities such as Akumazi, Umunede, Ute-okpu, Ewuru, Idumuesah and Ejeme in Delta State would find that all water bodies there are coloured with patches of oil. Similarly, many lands in the areas have been excavated for oil.

According to UNDP Report in 2013, “the Niger Delta region is suffering from administrative neglect, crumbling social infrastructure and services, high unemployment, social deprivation, abject poverty, filth and squalor, and endemic conflict. The majority of the people of the Niger Delta do not have adequate access to clean water or health-care. Their poverty, in contrast with the wealth generated by oil, has become one of the world’s starkest and most disturbing examples of the resource curse.”

On the other hand, terrorist activities are concentrated in the northern states and perpetrated mostly by a group known in Hausa language as “Boko Haram” which literally means: Western education is forbidden.

The sect, believed to have been formed in 2002, allegedly launched military operations in 2009 to create an Islamic state in Nigeria. Before President Goodluck Jonathan declared a State of Emergency in Adamawa, Borno and Yobe states in May 2013, an estimated 741 citizens had already died in coordinated attacks, according to a report by the University of Sussex in the UK. The report also says that at least 2,265 have died while about three million people have been affected as at April, 2014.

The devilish activities of the Boko Haram include the multiple bombing of military barracks, media houses and busy bus stops in Abuja, the UN House in Abuja, and the abduction of nearly 300 girls from a government secondary school in Chibok, Yobe State. The abduction has grabbed global attention, giving rise to widespread protests under the twitter platform “#BringBackOurGirls”.

Analysts believe that endemic poverty caused by desertification turned farmlands into barren lands and made the region a fertile ground for terrorists. There is an allegation that unemployed and hungry youths gladly accept peanuts from the masterminds to get involved in terrorism.

The rate of desertification in the country is reported to be high with the attendant destruction of about 2,168sq km of range land and cropland each year in the north. In Yobe State, which is one of the states under emergency rule, a study revealed that, in 1986, the rate of desertification which stood at 23.71 per cent increased to 31.30 per cent in 1999 and, by 2009, it had covered almost half of the state.

The report says that crop cultivation and animal rearing are no more productive in the state, because the soil has lost its fertility, while various infrastructures had collapsed as windstorm from the neighbouring Niger Republic and sand dunes had taken over the entire place.

In an interview, some northerners, who now reside in Lagos, claimed they fled the area and were engaged in menial jobs such as shoe mending, manicure, cart pushing and others, because the encroaching desert destroyed their farms.

Recently, Nigeria was rated by the World Bank Group as among the world’s extremely poor countries, alongside India, China, Bangladesh, DR Congo, Indonesia, Pakistan, Tanzania, Ethiopia and Kenya, even with the country’s huge economy, the largest in Africa. However, a map of the country shows that its poverty index is concentrated in the northern states where desert encroachment is more pronounced.

Militancy and insurgency in the Niger Delta and the northeast zone have placed Nigeria on the map of most insecure regions of the world known for violent crimes such as bombings, manslaughter and kidnapping of innocent people for heavy ransoms. Many concerned citizens believe that the authorities have not given adequate priority to tackling the country’s environmental challenges which would ultimately check the high level of insecurity in the polity.

For instance, the country’s Environmental Impact Assessment (EIA) document which holds industries accountable for the pollution and other environmental problems they cause in the process of their operations, has not been effectively implemented. Also, a Climate Change Commission Bill which seeks to galvanise actions of the relevant stakeholders to address climate change blamed on desert encroachment, flooding, loss of biodiversity and other environmental changes is yet to receive Presidential assent.

Many environmentalists consider such delays in the promulgation and implementation of required policies as a major setback towards creating a sustainable environment in Nigeria.

Majekodunmi said: “We have always had beautiful policies to create shelter belts to tackle desertification in the north. We had one about 21 years ago, during the military era which, if implemented, would have saved us the problems we face now.”

He is however optimistic that the ongoing Shelter Belt project which was inaugurated last year by the former Environment Minister, Hadija Mailafia, and championed by credible stakeholders (such as renowned environmentalist, Newton Jibuno), would be successful. According to him, the current environment minister should take over the project as well as the Great Green Wall programme so that they do not die like the ones before it.

Mailafia in July 2013 inaugurated the Great Green Wall (GGW) programme, in Bachaka, Kebbi State, which is meant “to create a contiguous greenbelt from the Northwest to the Northeast zone in the desert states with the objective of rehabilitating about 225,000 hectares of degraded lands, enhance food security, reduce rural poverty and generate employment for about 500,000 people in its first year of implementation”. The 11 most affected states, commonly called frontline states, are Adamawa, Bauchi, Borno, Gombe, Jigawa, Kano, Kastina, Kebbi, Sokoto, Yobe and Zamfara.

While launching the program, she regretted that £43.3 per cent of the total land area of the country is prone to desertification, exposing 40 million Nigerians to the threat of hunger and total starvation”. There is, however, no official confirmation of the extent of work done on the GGW project, but many people doubt if the worsening security problem in the region could allow any meaningful project to take place there.

Supporting this position, a security expert, Wilson Esangbedo, wonders “how a place under such serious security threat and heavy military deployment would welcome any development project”. According to him, “what is required is for the government to go to areas where there is relative peace and make its presence felt”.

Although oil companies are required to clean up their areas of operations, they cite the insecurity in the region as the excuse for failing to abide by the code. This explains why it is a welcome development that one of the giant companies operating there, ExxonMobil, has just announced plans to commence high sea clean-up of oil spills.

For the Managing Director, Lagos State Environmental Protection Agency, Dr. Adebola Shabi, the nation’s Environmental Impact Assessment should be enforced to make oil companies account for the pollution that they cause.

Other experts believe that getting oil firms to clean up their spills would not only encourage companies to buy and install pollution-control equipment, but would also help in creating jobs for the people. It is important that the government should have the will power to implement all its policies on creating a safe an environment conducive for the people to work and earn their living, in order to shun every temptation to disturb public peace.