Ghana on Friday recorded what turned out to be the first case of death from the fast spreading Ebola virus. 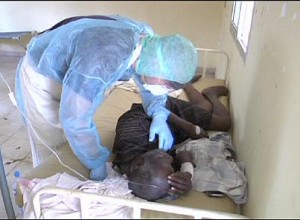 On Friday afternoon, a Burkinabe man, who had general symptoms of Ebola, including fever, nose and ear bleeding, was reported to have been taken to the Bawku Presbyterian Hospital dead on arrival.

The man was brought through the border from Burkina Faso to Ghana by his relatives who wanted proper medical care for him but he died on the way.

Dr. Joseph Yaw Manu confirmed to StarrFMonline.com that the man had died at the time he was brought in to the hospital.

Manu said: “What scared me most as a Medical Doctor is that he was bleeding from his ears and nose – symptoms of Ebola.”Manu has since sent blood samples of the deceased for testing to the Noguchi Memorial Institute for Medical Research at the University of Ghana.

A new report released by the Global Health Advocacy...

Following a series of consultations with global experts, the...