The European Union (EU) has been accused of pushing dangerous cleanup standards for three toxic flame retardant chemicals widely used in building insulation, upholstery and electronics (HBCD, PentaBDE, and OctaBDE). The allegation emerged Friday May 8, 2015 at the onging UN meeting of chemicals treaties in Geneva, Switzerland. 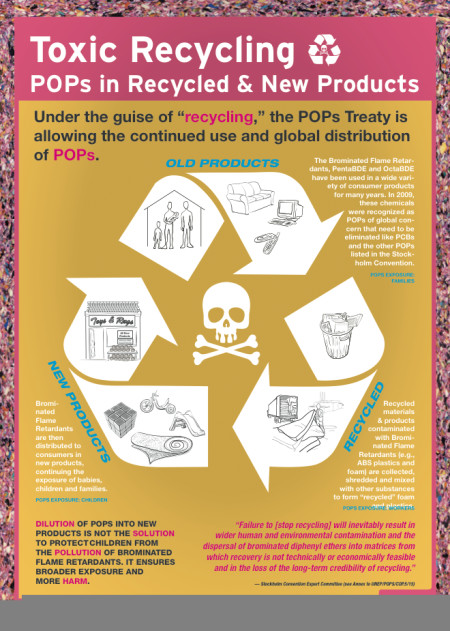 According to the claim, endorsed by Bjorn Beeler of IPEN, Leslie Adogame of SRADev Nigeria and Jindrich Petrlik of Arnika Association, all three toxic chemicals are listed in the Stockholm Convention for global elimination. They are ubiquitous in the environment globally and can disrupt human hormone systems, creating potential adverse effects on the development of the nervous system and children’s IQ.

“We do not want toxic chemicals recycled into toys for African children, particularly considering the present vulnerability of children in Nigeria to ongoing toxic dump, and we do not think EU children should be playing with them either,” said Leslie Adogame, SRADev Nigeria. “The EU already sends us ewaste and now it seems they want to increase our toxic burden.”

According to him, the EU proposal will allow toxic recycled products to be used by EU consumers, and then exported to developing countries as waste, transferring the toxic burden from richer countries to poor countries where the capacity to deal with contaminated waste is limited andwhere they will potentially addto health problems and hamper poverty reduction.

Ironically, the waste cleanup limit for PCBs and other substances already listed in the treaty is 20 times safer than the current EU proposal for flame retardants, despite the fact that they are all similarly toxic. Expert advisors to the EU noted that, under the EU proposal, none of the current PentaBDE wastes would qualify for cleanup. The EU appears to be designing a standard to avoid cleanup actions on the world’s most toxic chemicals.

Jindrich Petrlik from Arnika Association said, “As an EU-based public interest NGO we find it shameful to see the EU violating the integrity of the Stockholm Convention, and putting economic interests before human health and the environment. This is poisoning the circular economy.”