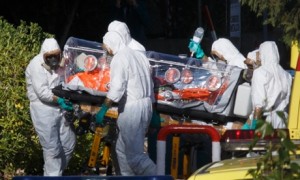 A Liberian doctor has died despite taking experimental anti-Ebola drug ZMapp, a minister has said.

ZMapp has been credited with helping several patients recover, including two US doctors discharged last week.

Abraham Borbor was one of three doctors in Liberia who had been given the drug and were showing signs of recovery.

More than 1,400 people have died from Ebola this year in four West African countries – Guinea, Liberia, Nigeria and Sierra Leone.

Ebola is spread between humans through direct contact with infected body fluids and several doctors and health workers have died.

It is one of the world’s deadliest diseases, with up to 90% of cases resulting in death, although in the current outbreak the rate is about 55%.

The speed and extent of the outbreak was “unprecedented”, the World Health Organization (WHO) said last week.

An estimated 2,615 people in West Africa have been infected with Ebola since March.

If approved by the president, those caught face up to two years in prison.

In an interview with Khadira Ahmed, Musikilu Mojeed, an...