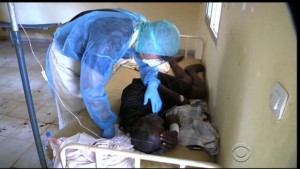 Information  says two new cases of the deadly Ebola virus in the country.

Information on the two new cases, confirmed by Federal Government officials at a press briefing today indicates that two new cases have been recorded in Lagos.

The two new cases brings the number of confirmed the ravaging Ebola virus to nine including that of the late nurse. Environews gathered that the nurse died as a result of her refusal to present herself to the authorities on time, meaning she was not among those quarantined after coming in contact with the late Patrick Sawyer.

Minister of health, Professor Onyebuchi Chuwku, who was in Lagos at the press briefing held at Yaba, Lagos to keep the public updated on developments concerning the rampaging Ebola virus, said a total of 139 people are under surveillance at present.

Among the 139 persons are 48 passengers who were on the Asky flight with the late Sawyer and others who came into contact with him from the airport to the hospital in the Obalande area of Lagos where he later died. The minister said all the passengers have been contacted and now under surveillance.

While describing the outbreak of Ebola in the West Africa sub-region as a “global emergency,” Chukwu called for the unity of the world in order to fight Ebola as it now poses a vicious threat to the African continent and the world at large.